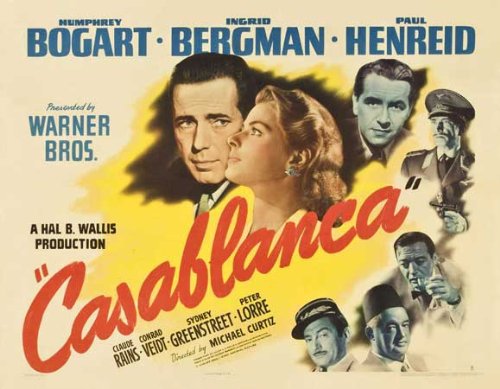 “You might as well question why we breathe. If we stop breathing, we’ll die. If we stop fighting our enemies, the world will die.” from Casablanca.
In 1942, Ingrid Bergman, Humphrey Bogart, and Paul Heinreid starred in Casablanca, the classic film about a love triangle. Ilsa, played by Bergman, is married to Victor Laszlo (Heinreid), but she thinks he’s dead. Rick (Bogart) and Ilsa fall in love, but then Ilsa finds out Victor isn’t dead after all.
By chance, they all meet in Nazi occupied Casablanca where Rick owns a bar. Laszlo is a highly sought after fugitive. The Nazis hope to capture him to squelch his effectiveness as a resister.
At the end (spoiler alert!), Rick decides to engage in resistance on his own and convinces Ilsa to escape with Victor while they can.
“I’m no good at being noble, but it doesn’t take much to see that the problems of three little people don’t amount to a hill of beans in this crazy world. Someday you’ll understand that.”
Maybe someday Ilsa did understand. But many people today have difficulty comprehending what the world is facing today. Sometimes our populace appears to be a very large, circular firing squad.
On Friday, viewers saw images from the terrorist attacks in France–images of dead bodies, images of grief and fear. Within the previous 24 hours, there had been other attacks in Beirut and Baghdad. During the coverage of Paris, I saw only one image from Baghdad, a explosie inferno. No human images.
Social media did not light up with prayers and sympathy for the terrorized Iraqis and Lebanese the way it did for the people of France. It later reacted to this discrepancy with an ugly allegation: Sympathetic posts regarding the more than 120 dead in France were racist if they did not also include an equal amount of sorrow over the other attacks.
The accusation is that Americans care about the French because they are white. It assumes that no Americans have been praying for peace in Iraq since 2007 or even earlier. Are we really picking apart people’s expressions of sympathy?
Sometimes one news event will eclipse another. The completely unexpected death of Michael Jackson eclipsed the more expected death of actress Farrah Fawcett who had been suffering from cancer. Our interest in Jackson’s story over Fawcett’s was not founded in racism.
Even so, racism is a big concern in America today.
It’s an issue at the University of Missouri now. Racism is happening there, slurs and threats. But when white people protesting racism tried to gain access to a “black only healing space,” organizers turned them away. The message that healing can only come within your own group only fosters more distrust, more division. Protests against racism should pursue inclusion, not exclusion.
Of course, our problem isn’t limited to social media or a few college campuses. The venom of division permeates our society. Social media presents our individualistic pettiness. Congress presents our systemic dysfunction. On last night’s installment of CBS’s 60 Minutes, Scott Pelley made the following observation:
“There was a time on Capitol Hill when the other guy had a bad idea. And now on Capitol Hill the other guy’s a bad guy.”
Speaker of the House Paul Ryan responded: “Somewhere in this we got into impugning people’s character and motives if we didn’t like their ideas. We[‘ve] got to get back to just debating ideas and not impugning people’s motives and character.”
America has real enemies. Many of us act like our enemies are the “bad people” whose ideas we don’t like. As if bombs going off in Baghdad and shots ringing out on the streets of Paris can never happen here.
A former security adviser for France was also on 60 Minutes last night. Alain Bauer helped America after the 9/11 attack on New York City.
“It’s just the beginning. ISIS said it. It’s just the beginning. They are–they are right. You need to listen to them, read them, understand what they say, the way they say it, and what they want. And they say it all the time.”
Such attackers, perhaps already in America, must enjoy our infighting.
Our enemies are not people who missed a news story and expressed condolences about another one. Our enemies are not people shut out from an event because, although their convictions are right, their skin color is “wrong”. Our enemies are not our people who have “bad” ideas.
When Rick and Ilsa parted, each one gave up his will, her will. They sacrificed. There was a greater cause even than their love for each other. They directed their efforts toward that greater cause, overcoming their common enemy.
If we do not do the same, the world, as we know it, will die. Defeating our true enemies is the greater cause that should unite us.
Christians serve an even greater cause. We serve the one true God. We should model such unity with fellow believers. We differ in how we worship Him, not in how we understand Him. Our common enemy is evil. Unity begins with us.