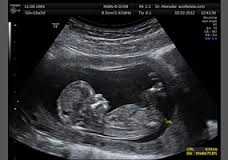 “#NotBuyingIt – that @Doritos ad using #antichoice tactic of humanizing fetuses & sexist tropes of dads as clueless & moms as uptight. #SB50.”
NEWSFLASH! It was a child in the womb! An actual human child!
Oh the horror! And the injustice!
NARAL–the National Abortion Rights Action League (pre-1973, the National Association for the Repeal of Abortion Laws) watched Sunday evening’s Super Bowl with a sharp eye. They were on the lookout for sexist messages. Unwitting Americans enjoying the game and some wings just might also ingest some damaging messages.
So the thought police at NARAL were trying to protect us. They were looking out for all of us. Well, not all.
As most Super Bowl advertisers do, Frito-Lay, the corporate chip makers, were trying to be funny. A woman is having a sonogram as her husband snacks on Doritos chips. The parents and technician watch the monitor as the fully formed child tries to reach for a chip in Dad’s hand. Dad pulls it away. The baby reacts. Frustrated, Mom grabs the chip and tosses it. The fully formed child shocks everyone as he exits Mom in a quest for the chip.
If we gave NARAL a quarter, could they buy a sense of humor?
The blowup over the ad didn’t just happen because abortion-supporting feminists happened to be enjoying the game when the ‘offensive’ material aired. This group sat down to watch the game with their fingers ready to tweet complaints about sexism in advertising.
NARAL @NARAL tweeted: “We’ll be livetweeting tonight’s #SB50 commercials! Join in to tell sexist #SB50 advertisers we’re #NotBuyingIt & raise up #MediaWeLike!”
The Doritos ad wasn’t the only one to garner the wrath of over the edge feminists. They also raged at a Hyundai ad in which a father (Kevin Hart) keeps track of his daughter on her first date.
“Hey, @Hyundai – taking away your daughter’s autonomy and stalking her on a date isn’t funny. #NotBuyingIt #SB50.”
According to NARAL, babies in the womb aren’t human. And an exaggerated view–that’s what made it funny–of Dad being nervous about his daughter dating is a denial of autonomy. (The Hyundai Super Bowl ad scored highest  on USA Today‘s Ad Meter. Super Bowl fans liked it best. So apparently Hyundai understood its audience.)
The concepts behind both ads are deeply connected. The protected daughter grows into a wife whose husband is present for events like sonograms. The unprotected daughter is unlikely to find such stability for herself and her children.
It’s fatherless girls who are ripe for NARAL’s picking. They end up at abortion mills or alone with children of their own. Fatherlessness begets fatherlessness. One kind of loss begets a field full of others.
“Fatherless girls are far more likely to drop out of school, suffer from depression or other emotional disorders and mask their pain through increased promiscuity.”
Anyone who has seen a sonogram knows it’s a baby. And a daughter with a doting dad in her life has the wonderful advantage of a man who truly cares about her.
NARAL would have us accept the notion that human children come from indistinct tissue masses that generate fingers and toes when air touches them. At birth, that is. They would also portray the natural desire of a parent wanting to protect a child as something mean and damaging instead of responsible and caring.
Congratulations, Frito-Lay, for affirming the humanity of the unborn, and Hyundai, for entertaining us with a reality that makes healthy families.