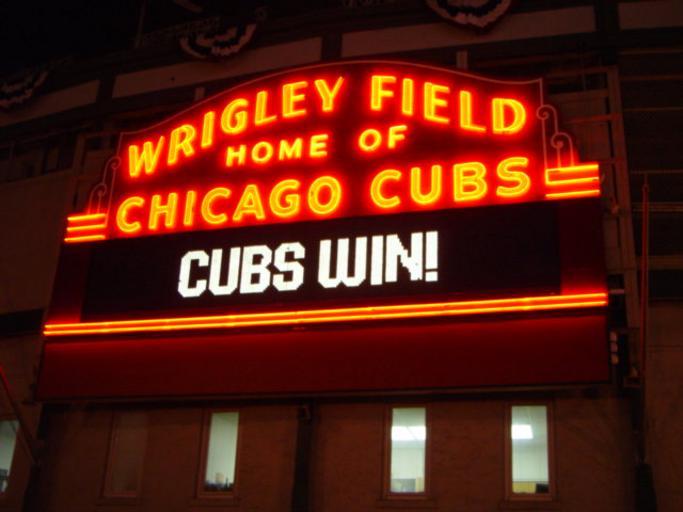 In 2004, the Boston Red Sox broke the curse of 86 consecutive years without winning the World Series and George W. Bush won reelection.
The Friday after Election Day, I was a guest co-host on a local political television show. A caller suggested that since the Redskins had won their football game the previous Sunday, a recount would show that John Kerry had actually prevailed.
I replied that it didn’t matter what the Redskins had done. The Red Sox had won the Series. We now occupied a parallel universe.
The next year, the Chicago White Sox won the World Series ending their curse, also of 86 years.
That leaves Chicago’s Cubs with the last curse of baseball. And it’s been a whopper–making Cubbie fans wait 108 years since their last championship.
The Cubs had a shot in 2003. But they blew a 3-0 lead in the eighth inning with some help from a fan who interfered with a foul ball. The ninth inning and the next game went downhill from there, sending the Florida Marlins to the Series, which they would win. The Cubs’ curse continued.
But in ’04, the Red Sox had Theo Epstein as general manager. Today, Epstein works at Wrigley Field for the Cubs.
This year looks different. It feels different. Twenty-sixteen seems like a new universe may be on the way.
Anyone who’s watched the presidential elections of the last few decades would agree. This year is strange.
The ads are the same, negative and with increasing frequency as November draws closer. And the polls are tightening as they often do as the election approaches and fence sitters decide.
But this year, we have two candidates nearly nobody likes. On the Democratic side, Hilary Clinton has moved left instead of to the center since the primaries. On the Republican side, it’s taken awhile for former opponents like Sen. Ted Cruz to get on board. And some, like Gov. John Kasich, still haven’t.
I know people who plan to vote only for down ballot offices. I know Gary Johnson voters.
It’s the only election year in my memory that I still haven’t decided what I’ll do when November 8, 2016, finally gets here. And I am leaning toward not telling anyone when I do decide–which may be when I’m standing at the polls. Peggy Noonan says I’m not alone.
“Every four years I ask people if they’ll vote, and if they have a sense of how. Every four years they tell me—assertively or shyly, confidently or tentatively. This year is different. I’ve never seen people so nervous to answer. It’s so unlike America, this reticence, even defensiveness. It’s as if there’s a feeling that to declare who you’re for is to invite others to inspect your soul.”
If the Cubs continue in their winning ways, the nation may rally behind them. They aren’t the Yankees. People either love or hate the Yankees. But we would love to see the long-suffering Cubs prevail.
In November, history will happen. But it may be easier to find a newfound loyalty in baseball than any love for whoever will occupy the White House come January.

0 Replies to “Clinton, Trump and the Curse of the Cubs”