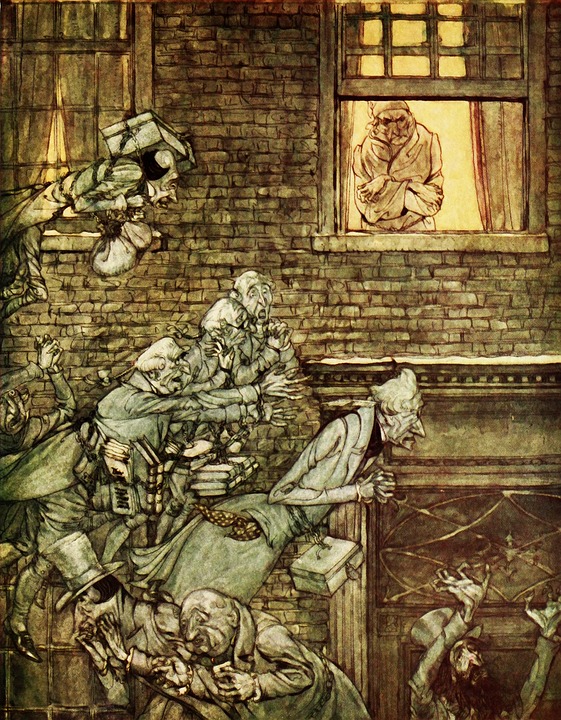 “No one is useless in this world who lightens the burdens of another.” Charles Dickens
I wasn’t sure it was the kind of story four children would want to sit through for nearly two hours. But it’s important for kids to know that stories can change the world. So we went anyway.
The movie was The Man Who Invented Christmas–a depiction of Charles Dickens’s struggle to publish his classic “A Christmas Carol”.
It wasn’t a good sign that the movie was showing only at our discount theater–an editorial comment by the theater showing a lack of faith in the film. Sometimes, that’s enough to limit the audience–creating a self-fulfilling prophecy.
But the movie was fabulous. And I’m not the only one who thought so.
The children with me, four of them, ages 9 to 11, found the first 15 minutes or so a little slow. (Younger children may not enjoy the film.) Then Christopher Plummer showed up as Scrooge. After that, the story enthralled them. And the poverty and lack of compassion for the poor the movie depicted, especially poor children, astonished them.
It was a lesson I hope they carry with them all their lives.
In the title role, Dan Stevens gives a stellar performance as the financially challenged and constantly interrupted author. Interaction with his own characters, particularly Scrooge, provides insight into Dickens’s struggle to come to terms with his father’s time in debtors’ prison when Dickens was young. The family setback put the boy to work in a sweatshop pasting labels on bottles of bootblack.
His time spent there and his struggle to survive essentially as an orphan helped give Dickens his compassion for the poor, a rare commodity in his day. That is the power of Scrooge’s story, for many in Dickens’s London bore traces of the miser.
Dickens’s story simply provided the convicting mirror. His readers called the story a “new gospel”–not an extra-biblical one, but good news inviting them–and us–to alleviate misery.
“A Christmas Carol” is the most told Christmas story excepting, of course, the account of Christ’s birth. It’s a story that changed England’s celebration of Christmas from selfish to selfless. And in our day and age of materialistic yule season, it’s a much-needed story. Because ignorance and want still cause destitution today.
In “A Christmas Carol,” the Ghost of Christmas Present has two children hiding under his robe. “This boy is Ignorance. This girl is Want. Beware them both, and all of their degree, but most of all beware this boy, for on his brow I see that written which is Doom, unless the writing be erased.
Dickens’s proposed solution to the deprivation around him calls individuals to give of themselves. It is a cause we must not ignore under penalty of Doom.
We can say those days were so much worse than today. In some ways, that’s true. But our neighbors in need are all around us–if we look to see them. And human trafficking is more rampant and more local than we’d like to think. Trafficking places children in forced labor–situations as horrible as Dickens’s stint in a bootblacking factory. Some much worse.
We still tell and retell Scrooge’s story because it’s timeless and powerful. And its power was no less when British and American readers first encountered him. Modern readers often don’t realize Dickens’s influence on his world. As Scrooge changed, so did many readers, opening their wallets for the first time to show compassion on the hungry and suffering of their day.
The Man Who Invented Christmas provides a delightful depiction of Charles Dickens’s struggle to overcome the problems of his youth and his troubled relationship with his father. It shows the state of many poor of his day and of ours.
Take time to see the movie this holiday season. And take some kids with you.
This movie can change hearts. And those hearts can be world changers.