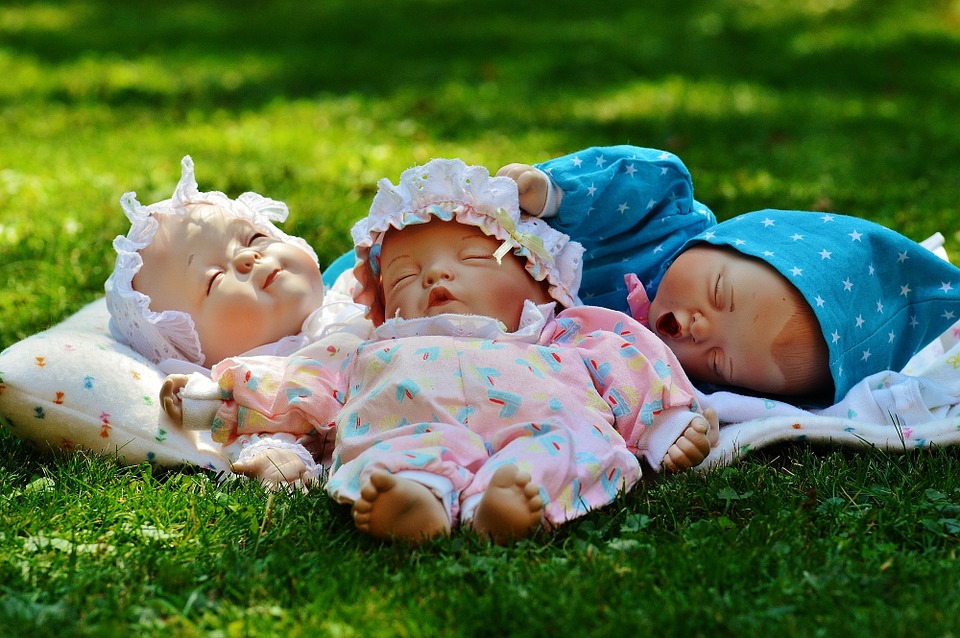 “Mary was bigger than Laura, and she had a rag doll named Nettie. Laura had only a corncob wrapped in a handkerchief, but it was a good doll. It was named Susan. It wasn’t Susan’s fault that she was only a corncob.
“Sometimes Mary let Laura hold Nettie, but she only did it when Susan couldn’t see.”
Laura Ingalls Wilder, Little House in the Big Woods
–I remember receiving a baby doll the Christmas I was three. She was dressed all in pink and white. And she came with her own bed.
Somewhere there exists a snapshot of me, mouth agape, delighting in the magic that Santa had come and brought me the pretense of motherhood.
When I was not much older, I received the hot new toy that year–Chatty Cathy. I don’t remember wanting her because any of my friends already had her. I wanted her because I had seen her on television. I wanted her because she was the closest thing to a real baby a doll could be.
Dolls are universal gifts for little girls. And so it came to be that my own daughter received Mary one Christmas–a gift from a special aunt–the kind of aunt who makes the gift even better–just because it came from her. Mary was well beloved. She wasn’t memorable from a marketing standpoint. She was a symbol of connection to someone we loved.
A few years later, 1983 was the year of Cabbage Patch dolls. There were long lines of mothers waiting, waiting, waiting for a shot at making their daughters’ dreams come true. I remember seeing (again, on television) the crowds standing in the dark and cold.
The dolls were expensive and in short supply. I had four children ages eight and under–two of them were girls. Child number five was on the way. To engage in the Cabbage Patch craze seemed impossible. So we waited.
My girls’ dreams came true the next year. By then there were no lines, no craziness. I gave them dresses they had worn as infants to adorn their dolls.
Wrapped and ready to go this year are two dolls for new little ones–one of them not yet born. One doll is blond like the expectant mother–and as the child may also be. The other has dark hair and eyes as our little princess has.
Life’s highest calling is to speak love into a child’s life. We begin to practice the love of mothering while we are still small. Others loved us when we could not love them in return. A child with a doll loves something that cannot love her back.
Our times at play help to shape us. A doll is a plaything, but so much more.