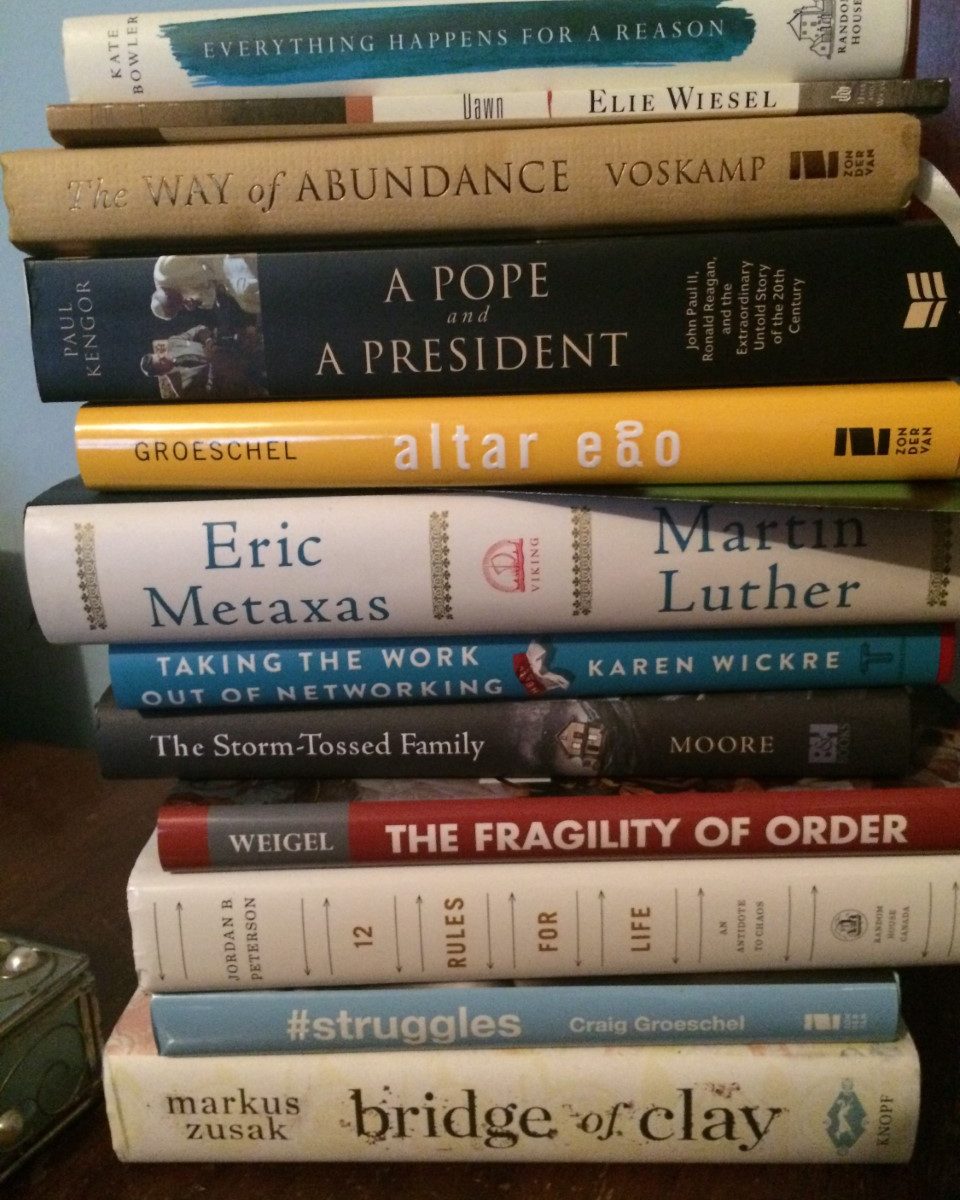 Last year, I resolved to read more. It was a generic resolution. And one without the means to measure.

This year, I resolve to do better in a more specific way. The accumulation of a pile of books–some I began and set aside and one I’m plowing through–is the foundation of my measure.

I began one book a few days before New Years Day–Everything Happens for a Reason by Kate Bowler. Bowler, a Duke Divinity professor specializing in the prosperity Gospel, writes of her struggles as a thirty-something new mother struggling against terminal cancer. She writes in the present tense, and her writing is raw and real. More on this very worthy read ahead.

Another book I’d already begun is The Way of Abundance by Ann Voskamp–a 60-day devotional I set aside briefly to focus on Christmas preparation and Advent-type readings. So far, Voskamp maintains, as usual, a compelling voice of walking in the way of Christ even during difficulty.

The next book I plan to tackle is Dawn–the second book in Elie Wiesel’s Night trilogy. I read Night once, voluntarily, out of curiosity. I read it again, involuntarily to a degree, after accidentally enrolling in a graduate class in Holocaust Literature.

I thought I had signed up for the other lit class at the same time. After all, who would want to study Holocaust Literature for a whole semester? Once I realized my mistake, I decided it was probably too late to try to switch classes. It was my last semester of grad school. I’d just gut it out.

Perhaps my mistake was an accident, or perhaps it was the guidance of God because that class was fabulous. The teacher was the daughter of an Auschwitz survivor and the head of the university’s English department. Best. Class. I. Had. In. Grad. School.

I’ve been curious about Dawn–Wiesel’s first work of fiction–but never took the time–never put it in my pile and never made myself publicly accountable–until now.

And there are two books by Greg Groeschel–Altar Ego and #Struggles. I found Groeschel viewing last summer’s Global Leadership Summit.

Jordan Peterson, George Weigel, and Russell Moore round out the enrichment side of the pile. Markus Zusak, the entertainment side, and Karen Wickre’s Taking the Work out of Networking, a professional enrichment pursuit.

So that’s the pile–my resolution to read with a specific measure. I’ll keep you posted on my progress. And please let me know what you’re reading!

37 Replies to “Resolving More Specifically to Do More”