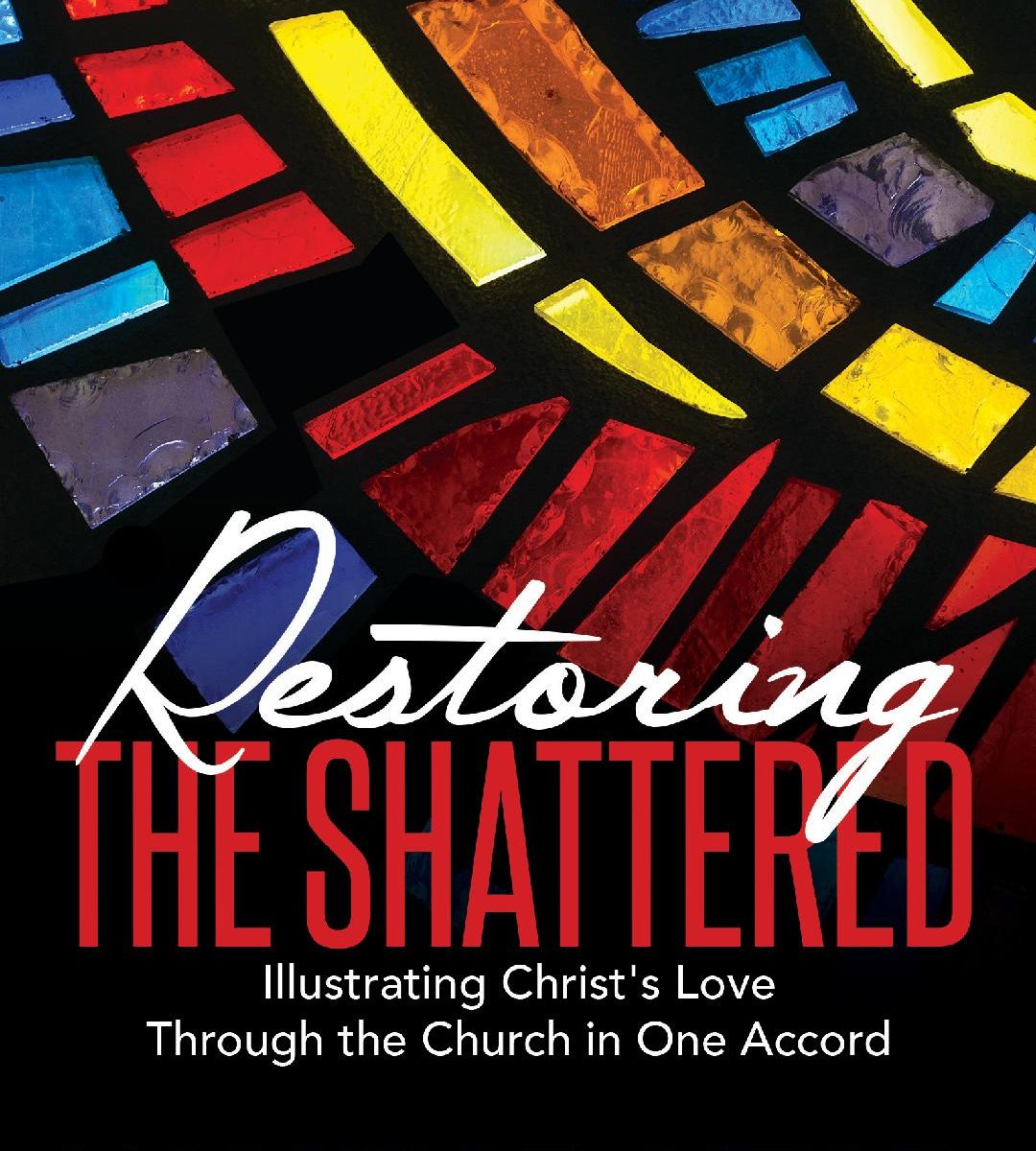 What follows is excerpted from Restoring the Shattered: Illustrating the Love of Christ Through the Church in One Accord–releasing in paperback on January 22–ironically the 46th anniversary of Roe v. Wade and Doe v. Bolton legalizing abortion in the United States throughout all nine months of pregnancy.

The debate over abortion had been raging even before I was a high school senior in 1973. In the school cafeteria one day, a fellow student showed me the materials she had gathered for her classroom debate on the topic. I still can visualize the image of tattered unborn children.

By the time the US Supreme Court decriminalized abortion, a handful of states had already liberalized their abortion statutes. But no one expected the total eradication of abortion laws that Roe v. Wade and Doe v. Bolton provided. Roe declared abortion a constitutional right, and Doe paid lip service to the states’ ability to restrict late-term abortions. Essentially, the court legalized abortion in the US for any reason and at any time during pregnancy. America became a darker place on January 22, 1973—the day of Roe and Doe.

But those decisions motivated people from various Christian denominations, other faiths, and even no faith at all to come together to end this horror. I was one of those people.

After our family settled into our new home, I felt restless. I needed a ministry—a cause to devote myself to. I volunteered at a crisis pregnancy center. And in January of 1979, I saw an announcement on television that would enlarge my faith community and expand my pro-life work. The local pro-life group was sponsoring buses traveling to Washington, DC, for the annual March for Life. I arranged for a sitter to watch Angela and Mike in anticipation of a day filled with grown-up conversation.

Calling the number on the announcement to reserve my bus seat kindled a decades-long friendship with the woman who answered the phone. Anne was a wife, a mother, and a registered nurse. She had been an advocate for life even before Roe and Doe, and she became my friend and mentor. We walked together that January with many others. Over the years, we protested together, lobbied together, laughed together, and came to love each other like family. Every Halloween when my children were young, we visited her home for trick-or-treat.

And there were other friends who impressed me with their commitment to life.

In the mid 1980s, I met John after he had spent a week in a Pittsburgh jail for blocking the entrance to an abortion clinic. At that time, rescue efforts across the country disrupted the abortion business in an effort to discourage women from aborting their babies. John was a young married man. I recall that he and his wife had a few children at that time. Eventually they would welcome ten babies to their family.

Knowing about his rescue and jail experiences, I asked him to speak to the junior high group at my church’s Wednesday evening youth program. When he looked into the room and saw about thirty kids, he nearly had a panic attack. After some deep breaths, he rallied, entered the classroom, and inspired us all. Pittsburgh was notorious for its treatment of pro-life rescuers. I thought it funny that thirty junior high kids terrified John, but he was completely okay with being civilly disobedient in a city known for mistreating protesters. In his talk, John didn’t dwell on the unpleasantness of his jail experience. Instead, he told us about a vision he had. Driving down the road one day, he envisioned Christ holding a dead unborn baby and weeping over the child. That experience propelled him into the cause for life.

Within the pro-life effort, I found a second faith community. It did not replace my church, but it did give me a new opportunity to live out my faith and convictions and watch others do the same.

The most significant example of unity between Catholics, Orthodox, and evangelicals in America is the response to the Roe and Doe decisions [regarding abortion]. Conservative Christianity—Catholicism instantly and evangelicals and Orthodox Christians a bit later—reached out to unwed mothers and the unborn, establishing crisis pregnancy centers and offering abortion alternatives. These ministries often involve people from different Christian traditions and are separate from established churches.

Pro-life ministries work to save mother and child from devastation and destruction. The effort employs a three-pronged approach—educating the public about life issues (not just concerning abortion but also about infanticide and euthanasia and, on the positive side, adoption), helping parents deal with unexpected pregnancies and children already born, and promoting legislation that upholds the right to life from conception through natural death.

Efforts in the political realm have been only marginally successful in protecting human life. But those efforts have kept the issue in front of the public. In spite of more than a generation of legalized abortion, the issue refuses to go away.

And abortion rates are now lower than they have been since Roe. While one study’s authors credit new, long-term contraceptives for the drop, they acknowledge that they did not investigate causes of the lower numbers.[i] Two Gallup polls from 2009 and 2012 show that support for abortion had slipped to its lowest point since Gallup began asking the question—pro-choice or pro-life?—in 1995.[ii] In 2015, the number of pro-abortion Americans climbed slightly, but abortion rates have continued to fall since they peaked in 1990.[iii]

Those who support abortion often accuse pro-lifers of caring only for the unborn, of having no regard for the mother or other family members affected by a crisis pregnancy. The accusation is a hasty conclusion that ignores the deep commitment of pro-life people to meet women’s needs as well as those of their children, born and unborn, since the mid 1970s. Those who minister through crisis pregnancy centers know their clients’ needs are not limited to housing, maternity clothing, and baby supplies. Surviving children (siblings and those who survive the abortion process) and post-abortive parents are walking wounded—struggling with physical, emotional, and spiritual scars. In response, many pro-life organizations have expanded services, offering post-abortion counseling, mentoring, and testing for sexually transmitted diseases. These ministries reach out to post-abortive fathers who either had no say in a woman’s decision to abort or regret their role in urging her to it. Moms and dads also often need to learn how to parent and manage a household. Crisis pregnancy centers have grown to meet the many needs of babies and their family members.

And ministries to single parents are not limited to crisis pregnancy centers. In order to meet the needs of low-income parents, many churches now host daycare centers. Unaffiliated with a particular church, Mom’s House began in Johnstown, Pennsylvania, in 1983. This ministry cares for children while their parents attend school or career training. Volunteers mentor single parents, teaching them practical parenting and household management skills. Now these parents can complete their education, find employment, and leave welfare. Mom’s House now has seven centers in four states.[iv] Such ministries, which can be found throughout the US, care for women and already born children.

Success stories of changed lives are plentiful. Pro-life Christians encourage our culture to recognize and uphold the sanctity of human life and the primacy of the family. In the meantime, we maintain our personal Christian doctrines and traditions. In no other area of public discourse have Christians worked together as effectively as they have in the pro-life cause—and sometimes with unforeseen results.

Dr. Bernard Nathanson was a central figure in the effort to decriminalize abortion in the US in the late sixties and early seventies. His transition to the pro-life perspective is particularly profound since he was an atheist. I heard him speak in 1980; his intellect and rhetorical skills vastly impressed me. I was unaware—as perhaps he was then—of the transformation sprouting in his heart. He later described his conversion to Christianity as “an unimaginable sequence [that] has moved in reverse, like water moving uphill.”[v] I used to joke that I was our local pro-life chapter’s token Baptist—a lone Protestant within a community of Catholic life advocates. Dr. Nathanson was the movement’s token atheist. His knowledge and experience regarding obstetrical medicine and abortion procedures were, of course, unparalleled within our ranks, and his atheism demonstrated that our cause was not simply one of religious fervor but one of human rights.

Nathanson became pro-life when a career change removed him from the abortion clinic and landed him in an obstetrical office at the dawn of prenatal ultrasound technology. Seeing the reality of preborn children altered his thinking about their humanity. The basis for his new convictions was science, not a foundational belief in the sacredness of human life made in God’s image. His arrival at that conclusion was yet to come.

What was the turning point for him spiritually? Was it Christian pro-lifers’ devotion to doctrine? Was it our intellectual grasp of the issue of human life? It was neither. It was the self-sacrifice and devotion to God he saw in the pro-life rescue movement—the same fervor that landed my friend, John, in a Pittsburgh jail. Nathanson was the rueful champion of “safe and legal” abortions. As a novice but secular pro-life observer, he witnessed the Christlike attitude of those in the rescue arm of the pro-life cause. He ote:

“I had been aware in the early and mid-eighties that a great many of the Catholics and Protestants in the ranks [of the pro-life effort] had prayed for me, were praying for me, and I was not unmoved as time wore on. But it was not until I saw the spirit put to the test on those bitterly cold demonstration mornings, with pro-choicers hurling the most fulsome epithets at them, the police surrounding them, the media openly unsympathetic to their cause, the federal judiciary fining and jailing them—all through it they sat smiling, quietly praying, confident and righteous of their cause and ineradicably persuaded of their ultimate triumph—that I began seriously to question what indescribable Force generated them to this activity. Why, too, was I there? What had led me to this time and place? Was it the same Force that allowed them to sit serene and unafraid at the epicenter of legal, physical, ethical, and moral chaos?”[vi]

This tipping point pushed Nathanson into a full-fledged investigation of Christianity that resulted in him turning his “life over to Christ.”[vii]

Permissions: You are permitted and encouraged to reproduce and distribute this excerpted material in any format provided that you do not alter the wording in any way, do not charge a fee beyond the cost of reproduction, and you credit the author.

Disclosure of Material Connection:  I have not received any compensation for writing this post. I have a material connection to Morgan James Publishing, the publishers of Restoring the Shattered. I am disclosing this in accordance with the Federal Trade Commission’s 16 CFR, Part 255: “Guides Concerning the Use of Endorsements and Testimonials in Advertising.”

26 Replies to “Restoring the Shattered in Paperback This Month”