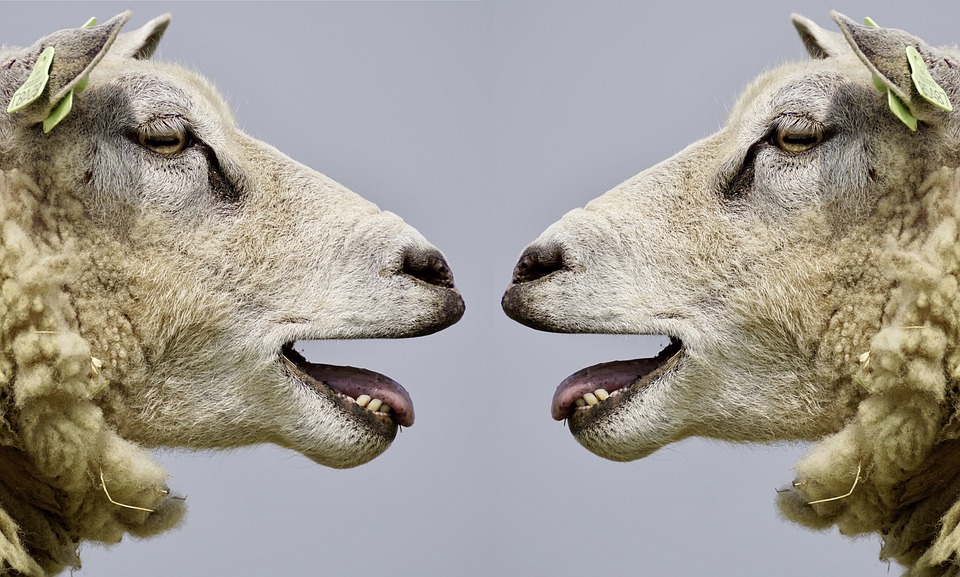 “At a point later in the year I observed a paddock with two mature ewes with rather thick necklaces of twisted hay. These stubborn ewes, I was told, had taken a disliking to one another in the field and were almost incessantly butting and harassing each other. These edible Elizabethan-style ruffs of hay were the only source of food in the pen, so if the battling ewes wanted to feed they had to get up close and nuzzle, ultimately developing a bond of familiarity” (Craeft, Alexander Langlands 73).

It’s happened more than we care to admit. We decide we don’t like someone. Then Providence pushes us together in a way that we have to rely on each other.

We come to see the “adversary” in a new light. A bond forms.

In the church, that’s community. Imperfect, sometimes ugly. Yet a community, ideally, that feeds its members.

Sheep crave community. Even if it means building a bond with an adversary. The wise shepherd puts the unruly sheep in a situation where they must feed each other so they can both return to the flock.

Craig Rogers says, “Although many think of their flocking instinct to be a sign of “dumbness,” it is in fact a community-based survival mechanism where they have learned that their strength is much greater in numbers and their comfort and survival is enhanced as a group rather than as an individual. Not a bad lesson for all of us.”

Two are better than one: They get a good wage for their toil. If the one falls, the other will help the fallen one. But woe to the solitary person! If that one should fall, there is no other to help. So also, if two sleep together, they keep each other warm. How can one alone keep warm? Where one alone may be overcome, two together can resist. A three-ply cord[ais not easily broken. Ecclesiastes 4:9-12 (NABRE).

Remember that Christian who irritates you? Offer some food–figurative or real–and try to get comfortable as an ally in faith. And how about that neighbor who’s a non-believer? That’s someone outside the flock, perhaps a wounded spirit just waiting for an invitation.

Like sheep wearing food around our necks, we carry the Bread of Life with us.

The lost sheep live among and around us. And we are the only ones who can invite them to come home.

20 Replies to “Unruly Sheep Feeding Each Other”