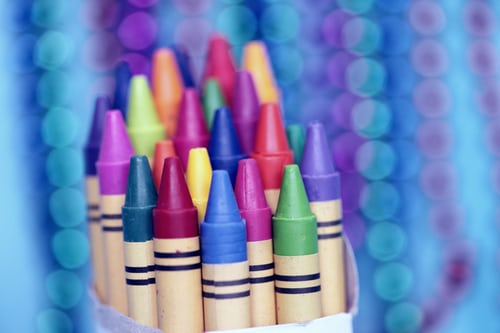 “Every record has been destroyed or falsified, every book rewritten, every picture has been repainted, every statue and street building has been renamed, every date has been altered. And the process is continuing day by day and minute by minute. History has stopped. Nothing exists except an endless present in which the Party is always right.” George Orwell~

When I was probably six years old, I went to a neighbor’s house to play. It was my first time at her house. I wanted her to like me.

Until that moment, my favorite color had been purple. But sitting at her kitchen table a few minutes later, I made it a point to use the blue crayon.

And in order to form what I thought was a truer picture of myself, I told myself and anyone else who asked for years after that blue was the color I most preferred.

It would take a long time until I realized I needed to be my honest self. And even longer to realize I couldn’t know myself on my own.

It seems easy to find women in media today who are being true to themselves. In Disney’s Alice in Wonderland (2010), Alice and Baynard the hound have a conversation about what Alice should do next.

Alice wants to go to the castle of the Red Queen to rescue the Hatter. Baynard says, “That is not foretold.”

This Alice is strong and knows her own mind. But perhaps what such movies, such a philosophy, created is a new way to push people onto a path they wouldn’t otherwise choose.

The pressure to choose a certain way remains in childhood, But it has moved far beyond favorite colors to the true essence of who we are.

Unlike the path parents of the 1950s, say, might have chosen for their daughters–marriage to a man of means and staying home to care for the children–the path much of society urges women toward today is to reject marriage.

There can be no constraints about what someone can decide for themselves. To propose constraint is to engage in what some define as evil. A primary form of evil. One worthy of punishment, of cancellation.

Author J.K. Rowling, no Christian apologist, recently got in trouble on Twitter. She explains:

“For people who don’t know: last December I tweeted my support for Maya Forstater, a tax specialist who’d lost her job for what were deemed ‘transphobic’ tweets. She took her case to an employment tribunal, asking the judge to rule on whether a philosophical belief that sex is determined by biology is protected in law. Judge Tayler ruled that it wasn’t.”

Rowling had been researching the issue of sexual identity for a book she was writing when she stepped into the mud puddle of support for Forstater.

But she stepped again, knowing what could, and would, follow.

“Months later, I compounded my . . . crime by following Magdalen Berns on Twitter. Magdalen was an immensely brave young feminist and lesbian who was dying of an aggressive brain tumour. . . . However, as Magdalen was a great believer in the importance of biological sex, and didn’t believe lesbians should be called bigots for not dating trans women . . . the level of social media abuse [against Rowling] increased.”

For her crimes, Rowling is to be canceled. In 1984, Orwell called the same process erasing.

When I chose the blue crayon over the purple one, I had begun the process of erasing myself. According to Rowling (and others), many of today’s young girls are erasing so much more.

“I’m concerned about the huge explosion in young women wishing to transition and also about the increasing numbers who seem to be detransitioning (returning to their original sex), because they regret taking steps that have, in some cases, altered their bodies irrevocably, and taken away their fertility. . . .

“Most people probably aren’t aware – I certainly wasn’t, until I started researching this issue properly – that ten years ago, the majority of people wanting to transition to the opposite sex were male. That ratio has now reversed. The UK has experienced a 4400% increase in girls being referred for transitioning treatment. Autistic girls are hugely overrepresented in their numbers.”

I hope you didn’t skim over that number too quickly. That was a forty-four hundred percent increase in girls wanting to become boys. Many of them are dealing with social challenges far beyond which crayon to choose.

How many of those girls opt to color their lives with a crayon they think will lead them to social acceptance? They tell themselves for years that it was the right color for them, only to realize later on, they colored their lives in a way they cannot erase.

I wish I’d had the social stamina as a child to choose the purple crayon. Choosing the blue one didn’t make that girl my friend. It did plant the seed in my heart that my choices depended on what others, no matter their level of wisdom, thought. It was the opposite of self-determination.

Society preaches–no, shouts–that self-determination and self-actualization are the be-all and end-all of human existence. They are far from that. Too many factors pull us in directions we would not choose if left to ourselves. And even when left to ourselves, can we truly trust our choices?

For our choices will always appear through the lens of faulty humanity–our own as well as that of others.

Rachel Jankovic points out that our pursuit of self-actualization has served us poorly. In You Who? Why You Matter and How to Deal with It, she makes a distinction between the Christian view of human life as sacred in its essence and the secular view that we form our own essence by what we do. Too often even Christians have bought into this second view, embracing self-actualization.

When we self-actualize, we neglect–or reject–what God has for us. In so doing, we lose ourselves. We color our lives with the wrong crayon.

Jankovic writes, “When we become more like Christ, we are becoming more truly ourselves. The most obedient you is the most truly you you (Jankovic’s emphasis). Complete submission to God is complete fulfillment.”

For God knows who we really are.