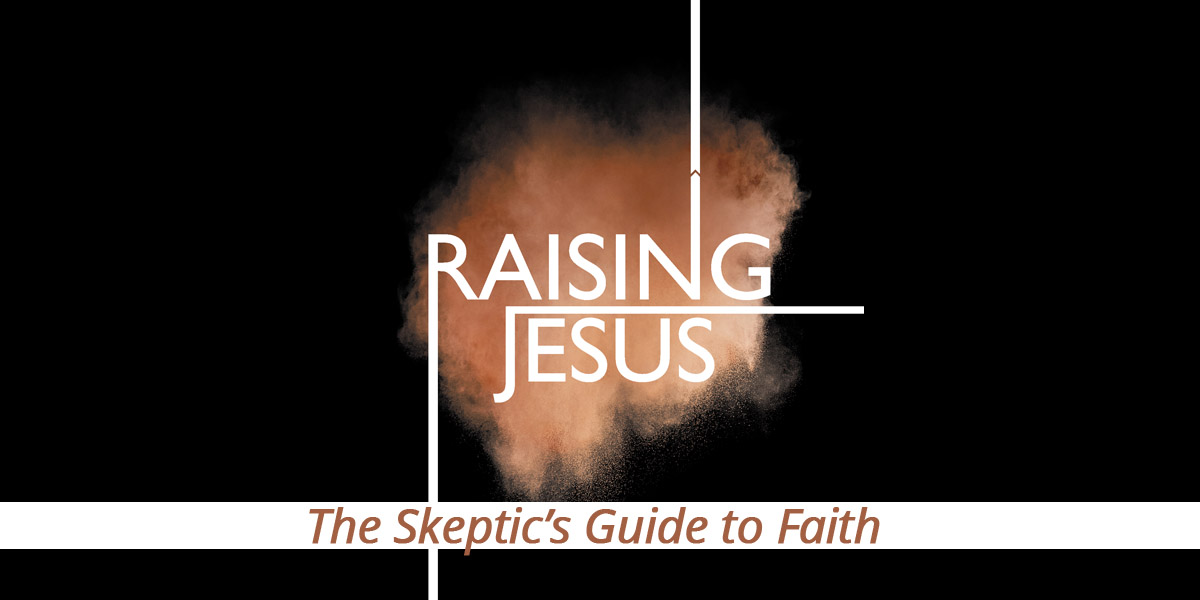 Christian books tend to be texts Christians write for other Christians.

E.J. Sweeney’s Raising Jesus: The Skeptic’s Guide to Faith in the Resurrection is a book by a believer for skeptics. Yet, this believer presents a different viewpoint.

Sweeney begins as one who is skeptical of the miraculous.

“Where others see divine intervention, I see only coincidence. . . .

“I don’t believe in UFO’s, ET’s, or any other assorted acronymed alien invaders. I always look for the simplest and most rational explanation for any phenomena.

“This is especially true of Jesus’ resurrection.”

Sweeney’s book is divided into three sections. The first, “Virtual Certainty–The Historical Evidence,” discusses various alternative theories about the resurrection. Sweeney takes a scholarly approach but with a light tone. The text is serious and thorough, not dry.

Part II, “An Uncanny Fit–The Resurrection and the Historical Jesus,” is my favorite part. This section discusses how beliefs the early Church embraced did not jive with Jewish expectations of the day. Christ’s disciples did not expect a Messiah to come who would suffer, die, and physically come back.

Jews who believed in a resurrection did not expect a bodily rising until the end times. That explains why early Christians thought the end was near.

One of Sweeney’s conclusions: If Christ’s followers were inventing the resurrection, they would have made it up in a much different form–in line with their own expectations.

God surprising us with His own plan, rather than fulfilling human expectation, further confirms the truth of Christ’s sacrificial death and victory over death.

Sweeney aptly presents and refutes arguments from those who dismiss Christ’s deity and paint His life as an attempted earthly revolution.

Instead, Sweeney shows us how “Jesus went willingly and non-violently to his death (Sweeney’s emphasis). And . . . he didn’t die as a rebel leader, but rather, somehow saw his death as the climactic sacrifice that would establish the New Covenant, the restored relationship between God and humans, and thereby defeat the real enemy which is sin and death.”

After laying out a solid case, Sweeney finishes with Part III: “Life is Hard . . . Then You Die!–The Philosophical Question.”

Sweeney concludes that the only reasonable response to the historical evidence and the distinctions between the Gospel accounts, supported by history, and Jewish expectations is to accept the reality of what seems, at first glance, to be unreasonable. Christ is God’s Son. Christ sacrificed His life for our sins. Christ rose bodily, overcoming death.

I didn’t agree with everything Sweeney asserted. I’m not that skeptical. Yet I do recommend this book for skeptics and believers alike.

For believers, sitting down with this book clarify much about the understanding Jesus’ followers carried into His ministry–and how that changed because of the resurrection and Christ’s well-documented appearances afterward.

For skeptics, the book lays out a case that you will have to refute only by turning your own logic on its head.

24 Replies to “Raising Jesus: A Review”