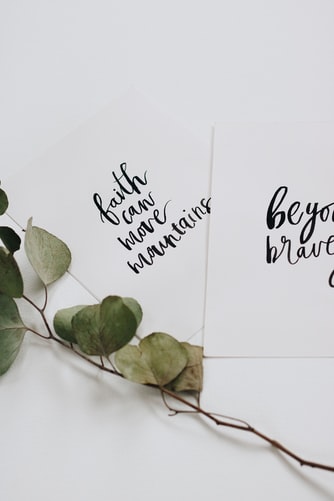 In the effort to end the slave trade in Great Britain, William Wilberforce and his allies “looked to the heavens” for help because in the late 1700s and early 1800s, “science was not as advanced as it is today.” That’s what I read in a student paper once.

This student saw faith in God as outdated. He resided within the realm of reason and excluded the possibility of a non-material world having found faith in the “heavens” unreasonable.

What he missed was how Wilberforce, outside the context of his Christian faith, could have come up with the idea that slavery and many other ills of his time were evil.

The notion that slavery, or any other social woe, could end through a secular perspective is a much more unreasonable idea than searching the “heavens” for moral leading. The theme of faith as unreasoned is not new, but it is now a dominant voice instead of being a secondary one as it was years ago.

In 1962, William E. Barrett published The Lilies of the Field, a novella about Homer Smith, a nomad Baptist handyman who builds a chapel for a group of Catholic Eastern European nuns in the barrenness of the southwestern U.S. after World War II.
The chapel becomes Homer Smith’s life dream, what he believes will be his legacy. But the task seems so big. The needs loom so large.

The book captivated my adolescent mind. At the time, most Americans overwhelmingly found Christianity a perfectly reasonable place to put their faith. Yet faithless reason had gained a foothold.

Barrett included a character who, aligning himself with the modern student/author would say, “Faith. It is a word for what is unreasonable. If a man believes in an unreasonable thing, that is faith” (96).

This man, so sure of himself, is a foil to Homer who has his doubts. At one point, Homer leaves the nuns and the community, some who also doubt the church building can become reality.

But once Homer has left his dream, the dream does not leave Homer. The vision of the nuns and the unfinished chapel calls him back.

When he returns, the community surprises him with donations of bricks, the literal building blocks of his dream. Everyone in the community contributes, that is, except, at first, the “reasonable” man without faith. Clinging to faithless reason, that man arrives one day to see Homer’s project.

Homer’s reaction: “This man probably did not believe in bricks. It was not reasonable that all of these bricks were here, so they were not” (99).

Faith is a step beyond reason. The Church is real. Over the centuries, God has built His Church. But God does not build with bricks man has made. He builds with stones He has formed.

“You also, as living stones, are being built up as a spiritual house for a holy priesthood, to offer up spiritual sacrifices acceptable to God through Jesus Christ” (I Peter: 2:5).

What then should we make of our understanding of science? Let’s begin with the scientific method.

According to Pew, today scientists are less likely to believe in God than the rest of society. Given the pervasive teaching that science trumps faith, that is no surprise.

Even so, more than half of all scientists do believe in God or at least some higher power. That more than half believe there is more to the universe than what we can see is surprising.

Those scientists realize that faith is not devoid of reason. Reason without faith makes man a god, an idea that has led us to genocide and licentiousness.

Yet, the question of faith cannot be one of numbers. It is not more reasonable to have faith because many others don’t believe. A majority is capable of being misled.

Wilberforce and those standing with him in faith knew it too. It was their faith and their reason, their looking to the heavens, that so changed the world.

This year I watched as Barrett’s book captivated a group of seventh and eighth-graders. I plan to introduce the book soon to another group of students.

We are living in days of darkness and division. But there is light in childlike faith.

22 Replies to “Reasoned and Reasonable Faith”