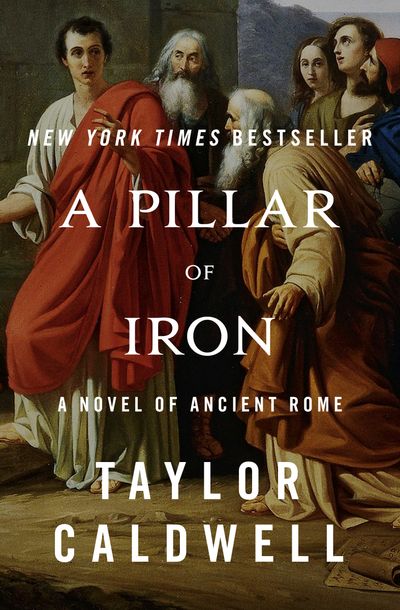 It’s become a tradition for me to select a stack of books I propose to read in the new year. I adjust the list as the year progresses. New titles find a place there. Others fall away.

Last year’s list altered when, in the spring, I committed to teaching middle school classrooms in the fall of 2020. I sought out versions of The Iliad and The Odyssey for that age group.

So far, I’ve found Rosemary Sutcliff’s versions to be accessible and complete, including much of the back story and details from The Aeneid to round out her version of The Iliad. The Wanderings of Odysseus is proving to be just as satisfying. Sutcliff’s books form a fine foundation for middle-schoolers and for adults wanting to brush up on classical literature.

The image above is of a book I’ve read twice already–first in my teen years, later as a thirty-something. It becomes more profound each time I pick it up.

Taylor Caldwell’s novel about the Roman Senator Marcus Tullius Cicero, A Pillar of Iron, depicts the dismantling of Rome’s republic on the cusp of Christ’s birth. (Cicero died in 43 BC, and according to Caldwell, was awaiting the Messiah’s birth.)

Caldwell saw parallels between Rome’s fall and the state of America circa 1965. So far, my reading indicates that the parallels have only deepened.

Caldwell dedicated the book to the late President John F. Kennedy (D), Senator Barry Goldwater (R), and Senator Thomas Dodd (D)–whose philosophies were probably more in line with each other’s than their party affiliations might lead us to assume.

I’m finding much history and wisdom within the pages.

The Power of the Powerless is a paperback (but the link takes you to a pdf version) containing an essay by Vaclav Havel, who, in 1989, became the first democratically elected president of Czechoslavakia, and later the Czech Republic.

A novel I may propose for my older students in the next school year is A Canticle for Leibowitz. From what I gather, it’s post-apocalyptic satire. And according to Goodreads, it’s an account of “the relentless progression of a human race damned by its inherent humanness to recelebrate its grand foibles and repeat its grievous mistakes.”

History repeating itself, another emerging theme.

I’ve thrown an eclectic collection into this year’s stack: The Ickabog–by J.K. Rowling. I’m one of the few on the planet who hasn’t delved into Harry Potter. In this new book, Rowling weaves a mythical tale–a morality play. I’m eager to see where it goes.

The Hobbit, by J.R.R. Tolkien–because I haven’t already read it. And I’m eager to see where Bilbo Baggins goes.

Rescued: The Unexpected and Extraordinary News of the Gospel, by Fr. John Riccardo. Riccardo is a breath of fresh Gospel air.

If You Give a Girl a Giant: Fighting for Your Life, by Karen Porter, spiritually edifying treatise on successfully defeating the giants life brings our way.

Abba Isn’t Daddy and Other Biblical Surprises, by William L. Burton, OFM, an invitation to delve into Bible study.

And another by Caldwell–Testimony of Two Men (1968) is set at the turn of the twentieth century. It tells the story of a controversial doctor pushing medicine into a modern era–beginning with the concept of handwashing. I’ve read this one before too. It’s worth another go too.

And I’m planning to do Dannah Gresh’s Bible study, Habakkuk: Remembering God’s Faithfulness When He Seems Silent. Habakkuk is a three-chapter, Old Testament book of prophesy. And the circumstances swirling around us today make this study an appropriate way to remember that God is with us–even when He seems silent.

So happy reading. Please let me know what you plan to read this year, and if you’ve read anything on my list, what you think about it.

20 Replies to “Reading for the New Year”