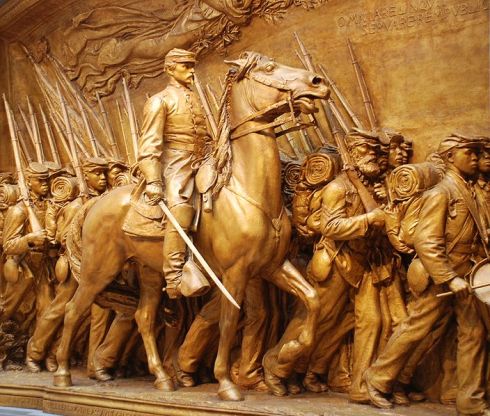 “We mistakenly look for permanent victories, political and cultural, and when they do not come, we despair. We seem not to realize that it is not permanent victories that we should seek but rather the preservation of ‘the permanent things,’ which is victory enough.” Stephen M. Klugewicz

It was a movie I watched with my children again and again. Glory (1989) told the story of the 54th Massachusetts, a regiment, the first Union unit comprised of African-American troops.

White officers led the unit, the government believing it must be so.

Maybe it was the supervision of white officers that sparked the vandalism of the regiment’s monument recently. Perhaps it was that the memorial depicts white officers mounted on horses and men of color walking. Nevermind that white enlisted men also walked while officers rode.

I thought the movie was valuable to show history and virtue to my children. Robert Gould Shaw was the commanding officer. His parents were notable abolitionists in Massachusetts.

Shaw was 25 years old when he took command of the regiment.

He told the men that the Confederacy had promised to execute any black man who took up arms against them.

They fought on anyway.

When they learned that black soldiers would be paid less than white ones, “the entire regiment–soldiers and officers alike–refused to accept their wages until black and white soldiers earned equal pay for equal work. This did not happen until the war was almost over.”

Yet they fought on anyway.

That is only some of the truth the movie presented.

One scene depicts a probably fictionalized conversation between Shaw and an enlisted man, Trip, (played by Matthew Broderick and Denzel Washington, respectively. Washington would earn an Oscar for his role.)

Trip refuses to carry the company flag asserting that things won’t change for his people after the war.

“Aint’ nobody clean. It’d be nice to get clean.” He thought, maybe, fighting would wash him.

That scene always made me feel a bit uncomfortable. But Trip was right. All was not fixed and clean once the war ended–even though the Union won.

My favorite scene comes the night before the movie’s culminating battle. The black troops hold a prayer meeting. A sergeant played by Morgan Freeman asks God that, if their fate is to die in battle, to let their “folks” left behind in bondage “know that we died facin’ the enemy. We want ’em to know that we went down standin’ up among those who are standin’ up fightin’ our oppression.”

Shaw led his men into battle. He died alongside them. He was buried in a mass grave with them.

There was no distinction between white and black in death. The Confederate commander thought he was insulting Shaw by having him buried that way.

But “Shaw’s parents replied that there could be ‘no holier place’ to be buried than ‘surrounded by…brave and devoted soldiers.’”

I wanted my children to carry lessons from this piece of history with them into adulthood.

I wanted them to learn about virtue in action. About justice. About love for humanity that pushes us to sacrifice. About the idea that such sacrifice for a great cause is heroic.

For those are the permanent things. Living out virtue to inspire more of it.

No matter how many Hitlers, Stalins, or Maos, there will always be those who live fighting evil, who die standing up to it. There will be heroic acts that leave permanent marks, if we don’t lose them, erase them, forget to tell those who come after us about them.

A question remains: Will we wipe out the past and erase our memory of heroes, those who fought to become clean by freeing others?

Eliminating the past won’t make us clean.

It will only mean we’ve lost the permanent things–the history that shows us truth, justice, and self-sacrifice for a greater cause.

We must stand up for the permanent.