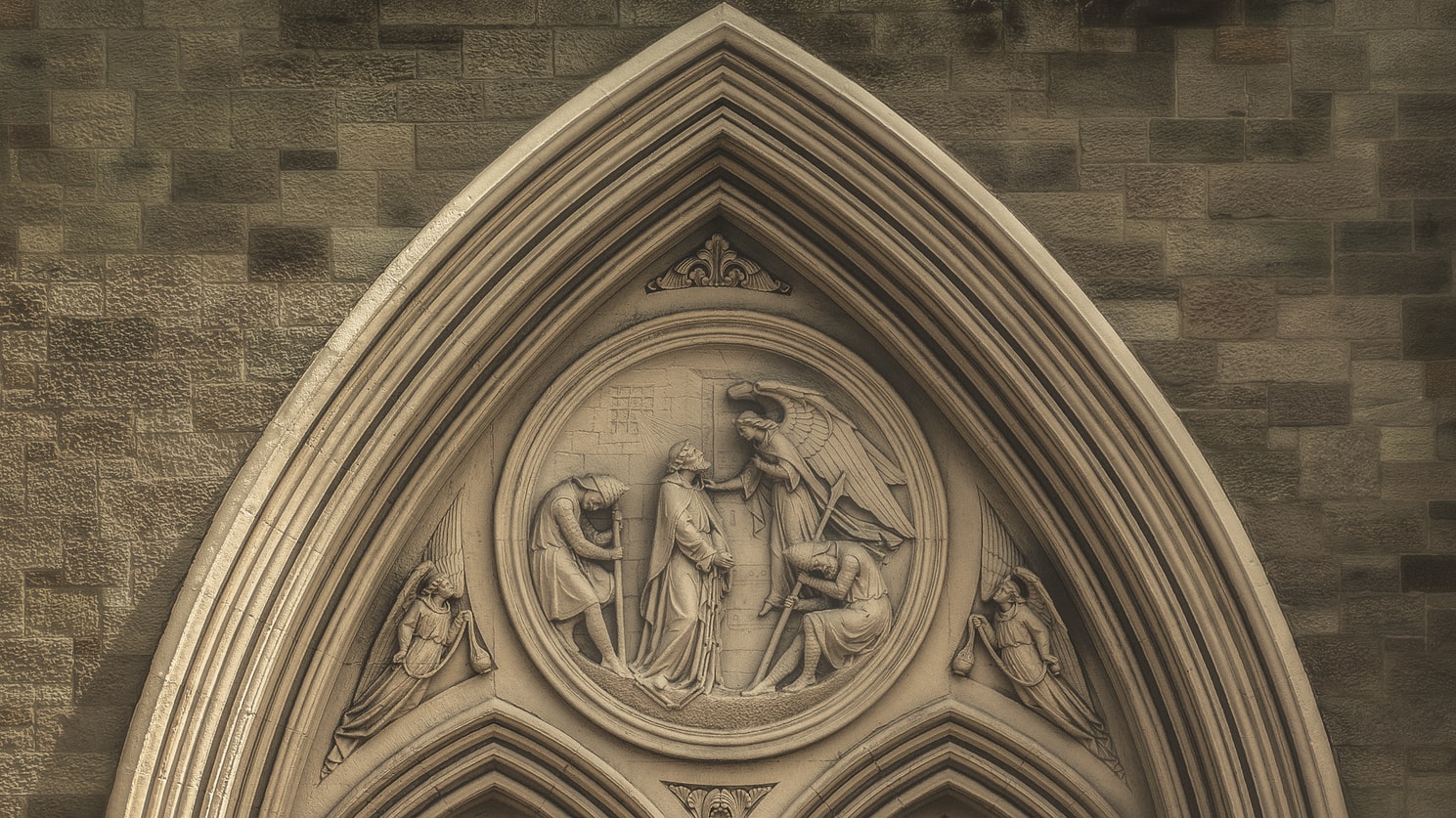 Translation: God has granted us this rest.

I’m just back from a vacation in Scotland and Ireland. Still a bit jet-lagged. My mind is filled with a clearer view of the history of that part of the world.

One of my favorite parts of the trip was the ferry ride from Scotland to Ireland. There was a sense of transcendence with the journey. A compelling impression percolated through me:

I was going home.

With our ever present outerwear, I saved a table in the food court and got in line to buy some food. The table sat beside a window where my husband and I could watch the water go by. I imagined a quiet time of solitude to enjoy that transcendent peace and a portion of a book.

It was not to be. But something better came instead.

I glanced over from the food line to see a woman sitting at “our” table. I thought it rude, but there were few places to sit. And perhaps such a thing is common practice in that place. So instead of quiet, we had conversation.

She was a nurse–retired but answering a call to fill in once every week or two. She rode the ferry to and from work in Scotland and gave me my first lesson on the deep animosity that still abides in some places between the Irish and the British.

She’d had an uncle who died at Normandy. “When I was a child, we were not allowed to speak his name. He was a Catholic, and he went to fight for the British.”

This story illustrates that–as bad as the Nazis were–fighting them required allegiance to Great Britain–who according to Irish history had behaved much the same as Nazis. Alliance was a bridge too far for many.

I hadn’t realized that Ireland attempted to remain neutral during World War II. The woman on our boat said neutrality was embarrassing. She seemed proud of the uncle who fought. Perspectives change over time.

We landed in Belfast–a more industrial setting than we had seen in Scotland. The next day was Sunday, and our group was to see the Titanic Museum. I had not realized the Titanic had been constructed in Belfast–embarked from Belfast–and sank on a returning voyage from America.

But sink it did, and I imagined there might be something better to do with a Sunday morning. I investigated local churches.

The first one I found seem like it might have a universalist slant. One of the comments on its website said the church was good for people of any religion. I kept searching.

We decided on Saint Malachy’s– a short walk from our hotel. Recently restored, the church had been built in the early 1840s–completed just before the Potato Famine ravaged the country.

The church lost its windows to Nazi bombing raids. Neutrality? The Republic of Ireland is just a bit south of Belfast. Belfast is in Northern Ireland–the part of Ireland where Unionists–those loyal to the British–reside next to the Republicans–those yearning for Irish independence from the UK. Northern Ireland was officially supportive of the British during World War II–yet still hung on to neutrality.

If it sounds complicated, it is. Scotland and Northern Ireland use the pound for currency. The Republic of Ireland uses the Euro. The republic intends to remain part of the European Union. Northern Ireland and Scotland expect Brexit. Some want to stay. Joining the EU nearly destroyed the Scottish fishing industry, so many are eager to go.

But back to Saint Malachy’s.

That Sunday was Pentecost Sunday–the celebration of the apostles in the upper room when the Holy Spirit came upon them.

The priest said that life, energy, light, and growth are gifts from Holy Spirit–the Spirit we cannot see–as we cannot see the wind, but we see the effects.

The Spirit of God brings new life even in places that seem lifeless. The Spirit gives energy. Holy Spirit in us is a gift from God–at Pentecost–and every other day too.

There is much talk about Catholics and Protestants attending schools together. There is growing secularization and shrinking church attendance. There is also talk of removing religion from public life–as if that will take away the purpose of the animosity. As if that will bring peace.

But the animosity comes from the perversion of those presenting themselves as religious, faithful people. It comes from political conflict–not with disagreements over doctrine.

It does not come from those willing to ask Holy Spirit to come.

Ireland is changing. I see that in the stained glass tributes in Belfast’s City Hall to the Irish who fought beside the British in both World War One and Two.

I see it on the television programs encouraging the removal of Ireland’s religious heritage from public life in politically slanted broadcasts.

But for a few potatoes, Ireland may have been my earthly home–rather than my home of heritage. The land is yet the home of my heart. A hurting land that needs healing and restoration from the unseen God who conveys life, growth, and peace.

Come, Holy Spirit. Come to Ireland. And shine light through her.