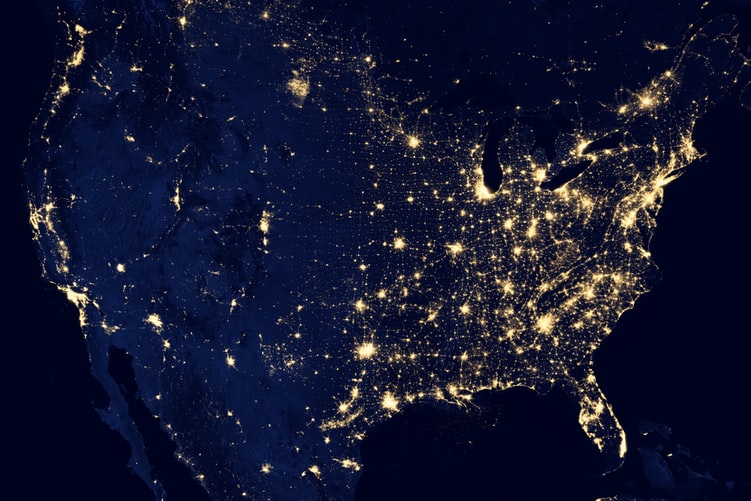 Two teens stood across from my book table at a national event. They weren’t yet old enough to vote. But perhaps when they are, they’ll cast their ballots to excise their part of Virginia to make it part of West Virginia–a harkening back to our Civil War. (Or our first Civil War?)

They are not alone in that way of thinking. Those hoping for Southern Virginia’s annexation to West Virginia will find a communion of spirit in Oregon, some of whose voters want to become part of Idaho. And California also has its own initiatives brewing. But those efforts aren’t about becoming part of an existing state. There are calls to split into multiple states—or even leave the United States altogether and become a separate nation.

The T carried our Keystone State for Trump in 2016–even in heavily Democratic Cambria County–coal country.

If voters in the T decided to follow suit with southern Virginia voters, the bulk of Pennsylvania might also join West Virginia.

While proposals for state-splitting are still in their infancy–or perhaps in their early childhood–it seems a good time to consider some of the ramifications.

What if the rural/conservative voters of every state thought it best to cut themselves free from every city that wanted to limit guns and fund abortions throughout gestation?

Would cities’ leaders moderate some of their views to stem the tide of departure (and lost revenues)? Would rural folks bend? Can both sides occupy a middle ground for long?

And there seems to be no room to bend among those who insist our abortion laws continue to go far beyond those of European countries that limit the procedure. The US is one of only seven countries that allows abortion after 20 weeks.

Secession and state-splitting sound far-fetched. But perhaps we are closer to making such dividing lines than we realize.

In American Secession: The Looming Threat of a National Breakup, F.H. Buckley writes:

“[W]e are now facing another constitutional crisis, as we did in the 1850s, when Congress was unable to compromise on slavery or avert the impending civil war. Today again, changes that must be made seemingly can’t be made because of our divisions and failure to compromise. The Constitution was designed for another country, one in which people agreed on fundamental principles, and that’s not today’s America. We are divided on things that used to unite us, and we don’t like politicians who compromise on things we care about.”

Explaining that the framers assumed secession was permissible (“by the consent of the governed“), Buckley lays out the arguments the Constitution’s crafters made as they shaped the document different factions today see either as pliable or etched in stone. It cannot be both.

He makes the case that California, for example, if it seceded, would save “$103 billion … [paid] in federal taxes [more] than it receive[s] back from Washington” and, therefore, should be able to pay for its plethora of social programs. He notes later that California has never had a majority wanting to secede.

But that may change as the middle class continues to flee the Golden State. It also remains to be seen whether $103 billion in extra revenues could truly create the entitlement utopia its leaders seek to create.

Even with such efforts and proposals on the table in multiple places, it may still be hard to imagine the fracturing of states or an actual secession attempt. But here’s part of what goodreads.com says about Buckley’s discussion:

Secession Lite would require a live and let live mentality. And just that option is under consideration in the state of New York. Conservatives in that state have introduced bills in the state house and senate that would divide the Empire State into three regions—New Amsterdam, upstate New York; New York; Manhattan and the five boroughs; and the Montauk Region, Long Island, Westchester, and Rockland.

“’New Amsterdam & Montauk regional governments would have the power to repeal these unnecessary NYS regulations and bad laws that are killing jobs,’ Divide New York State Caucus explains, [Gannett journalist Julie] Sherwood reported. ‘While the New York regional government could enact those changes it wants for NYC only that upstate currently blocks.’”

The bill remains in committee. But if it passes, it won’t need approval from the US Congress as it would if it were proposing splitting New York into separate states.

Perhaps Buckley has found a philosophical mean that could ensure freedom of conscience. For example, freedom for children to openly pray in schools governed locally. Freedom for municipalities to respect life, if they choose. Freedom for pharmacists to refuse to provide the means for chemical abortion. And that could only happen if the Supreme Court—whose membership is a new battleground for our day—will refrain from dictating what must be for the whole country.

The ideas of secession, state splitting, and regional secession light sound crazy. Buckley tells us they’re not. They or some form of them are real and on the way.

The unprecedented is what we’re experiencing in 2020. Our divided house hovers over a chasm of chaos. And chaos will continue unless we find a Golden Mean of citizenship we can agree on—or navigate how to go our separate ways.