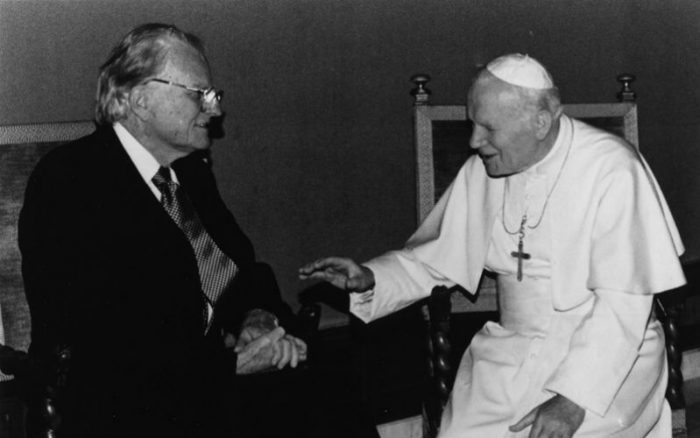 In 1978, Cardinal Karol Wojtyla became Pope John Paul II, the first non-Italian pope in 456 years. Not only was he not Italian; he was from Poland, a country where the government despised the Church. This new pope was different. Younger than any other pope in the previous century, he had survived the Nazi occupation only to endure Soviet oppression. He knew the suffering that is oppression, and it infused his ministry with vivid colors.

When Wojtyla was in Rome becoming the new pope, Billy Graham was in Poland preaching from Wojtyla’s pulpit, having come at Wojtyla’s invitation. No other Polish Catholic leader would agree to invite Graham, and he couldn’t go without an invitation. Graham would later preach in Orthodox and Reformed churches, a Jewish synagogue, and an Orthodox monastery during his European travels.[i]

Wojtyla and Graham had planned to get together during Graham’s visit, but Wojtyla’s call to Rome for the papal election delayed their meeting.[ii] Before Graham’s arrival, Wojtyla had been overseeing a “radical partnership” between a Catholic youth renewal movement and Campus Crusade for Christ.[iii] His work to light local flames of faith in the young kindled a global bonfire he could never have imagined.

In 1979, the new pope returned to his homeland where more than one million Poles lined the streets to welcome him and millions more came to hear him.[iv] Lech Walesa, firebrand of the Solidarity movement in Poland, told Peggy Noonan in 2002 that “we knew the minute [John Paul] touched the foundations of communism, it would collapse.” Walesa credited “heaven and the Holy Father” as most responsible for destroying communism in Poland.[v]

The pope’s visit to Poland was a tiny pebble dropped into a steaming pond. The resulting ripples turned into a tidal wave. When Mikhail Gorbachev became the Soviet premier, he saw the handwriting on the wall in Poland and began to implement reforms across the Soviet Union. He hoped to save communism by reforming it.[vi]

Nineteen-eighty-nine was also the year Hu Yaobang died in China. Hu was a high-ranking communist official in the People’s Republic. He had fallen out of favor with party power brokers because he supported reforms, loosening controls on the press and the people. Inspired by student protests in America and South Korea they had seen on television, Chinese college students gathered in Beijing at Tiananmen Square to mourn Hu, their advocate for democratic reform. The marathon sit-in lasted seven weeks. Demonstrations weren’t unheard of in China, but the international broadcast of such demonstrations was. The international press was in town to cover Gorbachev’s visit to Beijing. Because of his attempts to reform communism, the protesting Chinese students considered him a champion of democracy.[vii] The presence of the international press made possible our knowledge of the Tiananmen Square massacre. In front of the international media, the Chinese government, having lost face in the weeks’ long standoff, sent the army into the square, killing thousands and capturing surviving protesters.

Eastern European Christians would ultimately see freedom. The Chinese students, on the other hand, did not get the change they had hoped for, but change is what China would see. The Beijing massacre and imprisonment of surviving demonstrators prompted Chinese youth, especially students, to look for a new form of freedom. Many found that freedom in Christ. Why did young Chinese college students suddenly develop a passionate interest in the Christian faith? David Aikman writes that one “suggestion was that China’s traditional Confucian view of man as inherently good was shattered under the tanks that rolled onto the center of Beijing.”[viii] The Chinese students had put their faith in their government, and their government turned on them and attacked them. Now they would look elsewhere for someone to trust. Within the next ten to fifteen years, China is on track to become the most Christian nation in the world.[ix] The new wave of freedom that started in Catholic Poland ultimately sparked an explosion of evangelical Christianity halfway around the world. Pope John Paul II helped ignite that spark.

John Paul II began his papacy by hoping to visit his Catholic homeland. A faithful prayer warrior, he no doubt prayed for the people of his native land. The echoes of his first trek to Poland resonate around the world and into eternity. Christianity and the call for freedom have gone hand in hand throughout history because Christianity is the truest form of freedom. It frees us from the bonds of sin and points us to eternal concerns and away from irrelevant earthly ones.

The more freedom and opportunity we have, the more God expects of us, but it seems that the more personal comfort we have, the less we do for each other. In America’s large cities, our neighborhoods are more alienated than ever. Fear, anger, and misunderstanding separate us. Many of us feed a selfishness that wants to gain comfort others already have. Some of us just want to hang on to our own level of comfort.

Historically, as Christianity emerges in a hostile society, Christians have come together to further the gospel. Pope, now Saint, John Paul II and Billy Graham showed us the difference accord can make in oppressed nations like Poland once was. But accord is also apparent in oppressed China.

I had the blessing of meeting one of the Chinese student protesters who turned to Christ after Tiananmen Square. I asked him about separation within the Chinese church. “Denomination is not important in China,” was his reply.

[ii] The pope would later visit with Graham in Rome multiple times, and the two corresponded through letters. When John Paul died, Graham said this pope had been the “most influential voice for morality and peace in the world in the last 100 years.” Michael Ireland, “Billy Graham: Pope John Paul II Was Most Influential Voice in 100 Years,” CBN.com transcript of CNN’s Larry King Live, broadcast April 2, 2005.

Excerpted from Nancy E. Head’s Restoring the Shattered. Get your copy here!