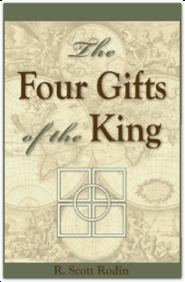 “Instruct these young warriors in the battle that lies ahead of them. Teach them how to fight using the truth as their weapon. Show them how to see the real kingdom, how to recognize the great distortion, and where to launch their campaign against the evil that has befallen this land. Teach them, Steward.” From The Four Gifts of the King~

Imagine having a message for your grown children who’ve gone astray. But you need some way to help them be willing to hear it.

That’s the premise of a story within a story in the fabulous novel by R. Scott Rodin–The Four Gifts of the King.

It’s part allegory, part fantasy, and part contemporary novel. A novel piece of work, if you will.

Sam Roberts receives a windfall that he never saw coming. And when he finds out that his time is short, he ponders how to pass along the gift to his four grown children who have strayed from the path of Christian faith.

After Sam’s death, his lawyer explains to Sam’s four children the terms of his will. Sam has written a book and the children must read it before they can claim their inheritance. Sam’s two daughters and two sons take turns reading the story aloud to each other.

Rodin deftly weaves the two stories together and is not preachy in the application of Sam’s story to the lives of his children.

In Sam’s story, an army of evil Phaedra a final battle against the army of the good king. And Steward, the hero on a quest to this strange land, must convince the deluded people of the kingdom to follow their true king.

Themes of meaning, love, faith, compassion, obedience, service, and forgiveness abound in this tightly woven story of good versus evil–the foundation of all mythology.

Rodin’s fantasy world is captivating. His hero’s quest is believable. In his places–Aiden Glen, Seudomartis, Pitcairn Moor, , Petitzaros, and Ascendia, Rodin builds a world where the Phaedra deceive people into building false ramps to nowhere and looking into reflectors that reveal only lies about those seeking their true selves.

Serving, giving, healing, seeking, and finding, and most importantly, trusting the King–that’s what this book is about. The read is a ride worth taking.

And along the way, you too may come to know the King’s deep peace.

The Four Gifts of the King is available on Amazon at https://www.amazon.com/Four-Gifts-King-Scott-Rodin/dp/1683509323.