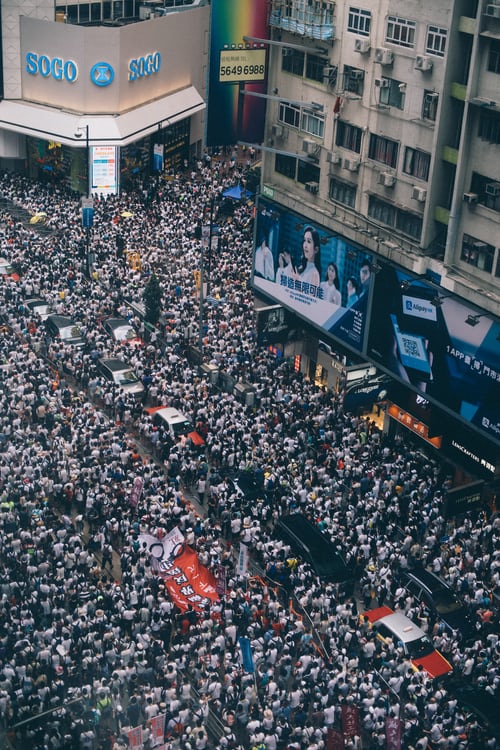 It was a highlight of my career as a news reporter, interviewing Shengde Lian, one of the organizers of the Tiananmen Square protests. Now it seems that piece of history from 1989 is repeating itself in Hong Kong today.

Inspired by student protests in America and South Korea they had seen on television, Chinese college students gathered in Beijing at Tiananmen Square to mourn Hu [Yaobang], their advocate for democratic reform. The marathon sit-in lasted seven weeks.

[In Tiananmen Square, protesters crafted a goddess of liberty akin to our statue in New York’s Harbor. ]

Demonstrations weren’t unheard of in China, but the international broadcast of such demonstrations was. The international press was in town to cover [Mikhail] Gorbachev’s visit to Beijing. Because of his attempts to reform communism, the protesting Chinese students considered him a champion of democracy.[i]

The presence of the international press made possible our knowledge of the Tiananmen Square massacre. [There were other crackdowns at the same time across the country.] In front of the international media, the Chinese government, having lost face in the weeks’ long standoff, sent the army into the square, killing thousands and capturing surviving protesters. [Lian served 18 months in a laogai–the Chinese equivalent of a Soviet gulag.]

. . . The Chinese students . . . did not get the change they had hoped for, but change is what China would see. The Beijing massacre and imprisonment of surviving demonstrators prompted Chinese youth, especially students, to look for a new form of freedom. Many found that freedom in Christ.

Why did young Chinese college students suddenly develop a passionate interest in the Christian faith? David Aikman writes that one “suggestion was that China’s traditional Confucian view of man as inherently good was shattered under the tanks that rolled onto the center of Beijing.”[ii]

The Chinese students had put their faith in their government, and their government turned on them and attacked them. Now they would look elsewhere for someone to trust. Within the next ten to fifteen years, China is on track to become the most Christian nation in the world.[iii]

Hong Kong is very different from Beijing. Crosses hang on the exteriors of hospitals to signify their connection to churches. When the British left Hong Kong to the Chinese in 1997, they left behind the stamp of a Christianized culture. They left behind an understanding of basic freedom.

After the 1997 takeover, China discovered in Hong Kong what free enterprise could do. The “communist” government adopted capitalistic practices–with the military owning some companies.

The Mainland economy grew in leaps and bounds. China was building a middle class (without a minimum wage and with a flat tax, by the way, a graduated income tax having been foundational to Marxism.)

Kayla Wong and Emily Lo provide an account of a Chinese woman waving the British Union Jack. This woman is not calling for a return to British colonialism but to the practices that helped Hong Kong prosper under the British.

She says Hong Kong has a 20-year history of government’s unkept promises.

Protesters also dare to wave the US flag. And while we are divided over gun control, they are asking for a Second Amendment.

Will Christianity see a resurgence in Hong Kong as is happening in the mainland? That remains to be seen.

China has not sent troops and tanks into Hong Kong–yet–although the military is amassing on the border and engaging in exercises designed to intimidate. All the while, the Hong Kong police show no mercy to the protesters.

Perhaps China and Hong Kong are at a crossroads. Perhaps the events that unfold in Hong Kong in the coming days will determine whether there is freedom or continued oppression.

Only one King is faithful to His word. Pray for Hong Kongers and Chinese to find that King. Pray for peace and freedom found only in Him.

This post is partially excerpted from Restoring the Shattered.