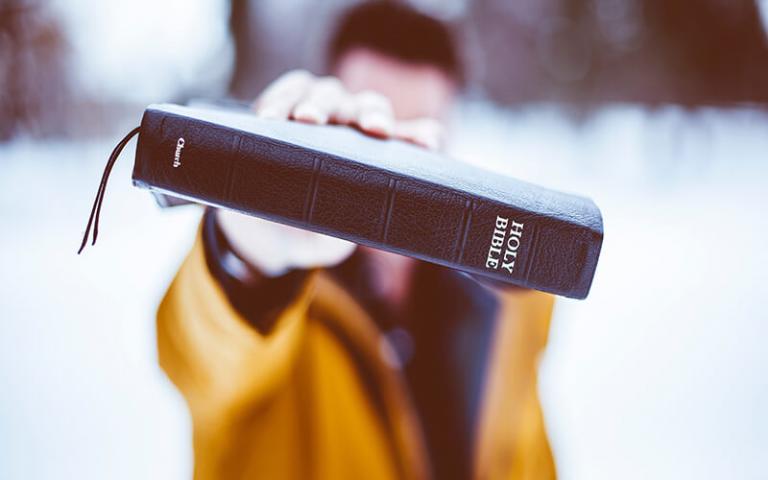 There you are, Ivan Denisovich, your soul is begging to pray. Why don’t you give it its freedom?” (161)

In One Day in the Life of Ivan Denisovich, author and Soviet dissident Alexander Solzhenitsyn presents Ivan, a man yearning to be released from the Soviet gulag. Near the end of the one day the book depicts, Ivan has a conversation with Alyosha, a Christian whose joy defies the prison atmosphere.
In their exchange, Ivan acknowledges the existence of God but he’s seen corruption in the church. Alyosha replies, “It’s because their faith is unstable that they’re not in prison.” Only those with steadfast faith go to jail.

Only the faithful pay a price.

As the conversation continues, Ivan questions the power of prayer. “However much you pray it doesn’t shorten your stretch. You’ll sit it out from beginning to end anyhow.”

What Alyosha says in response is surprising. Stunning, in fact.

“Why do you want freedom? In freedom your last grain of faith will be choked with weeds” (163).

Now there’s a thought that seldom creeps into the minds of American Christians. For two centuries, America has been the land where faith is free. There is little if any cost. We only see advantages to our freedom, never disadvantages.

In “The Grand Inquisitor,” Fyodor Dostoevsky presents Alyosha, a priest, who is generous and loving. His brother Ivan is an atheist who plans to live until he is thirty and then commit suicide.

The two discuss a parable Ivan has written. The conversation is a chapter in The Brothers Karamozov—“The Grand Inquisitor.”

In Ivan’s parable, a 16th century Cardinal/inquisitor talks to a silent Christ who has returned to earth for the day. Christ sits silently while the inquisitor tells how he and others in power have replaced God and improved upon His plan. They have convinced the populace to willingly relinquish their freedom.

Christ had brought freedom with the promise of heavenly bread. But He did not bring guarantees of earthly bread or even happiness—something we American Christians tend to think should naturally proceed from freedom. The inquisitor instead offers people earthly bread at the cost of their freedom. Not having to pursue their own bread, the people will be happy, the inquisitor claims:

In the 1960s, President Lyndon Johnson promised America freedom and happiness. He admitted he did not have the “full answer” to America’s woes. But he determined to find “the best thought and the broadest knowledge from all over the world to find those answers for America.”
His speech marks a turning in America, certainly not the first—or the last—from the wisdom of God to the wisdom of man.

“The purpose of protecting the life of our nation and preserving the liberty of our citizens is to pursue the happiness of our people. Our success in that pursuit is the test of our success as a nation.” The government’s new goal was to effect personal happiness in its citizens. Without it, according to this administration, the nation was a failure.

It’s been more than half a century since LBJ promised that programs could produce a heyday of peace and prosperity, a heaven on earth utopia. But it was not to be.

The pursuit of happiness is not something that anyone–including the government–can chase on someone else’s behalf. It comes, not in bread, but in purpose—a specific purpose.

Ivan thinks he has figured out how to fix the world. But Ivan still isn’t happy. Before they part, Alyosha kisses him.

Alyosha knows happiness does not come in the form of bread. It comes in the form of love. And that kind of love comes only through Christ—not through personal comfort. Solzhenitsyn agreed.

He said, “Even biology tells us that a high degree of habitual well-being is not advantageous to a living organism.” Alexander Solzhenitsyn

At Harvard’s commencement in 1978, Solzhenitsyn spoke to the graduating class, the future academic, business, and political leaders of America. He told them that “intense suffering” had produced spiritual development in the East, and that our comfortable lifestyle in the West had produced in us a state of “spiritual exhaustion.”

Solzhenitsyn said that Americans had “lost the concept of a Supreme Complete Entity which used to restrain our passions and our irresponsibility.” He said we needed “voluntary, inspired self-restraint” to “raise man above the world stream of materialism.”

We needed to step away from our comfort because our comfort had made us numb. Comfort had put us to sleep. Self-imposed discomfort would awaken our spiritual senses and take us back to God.

The Harvard students booed him off the stage.

But through those years, we were always more comfortable than much of the world. Comfort softens us. Discomfort stretches us to new purpose.

Discomfort makes us look up. Peggy Noonan tells us to “embrace” crisis “as a blessing” and that, if we have not been so blessed, to “pray for one” (82).

It’s always my natural bent to claim that my blessings in that department have been more than adequately fulfilled, thanks anyway.

We always want to avoid the pain of trials. And for the most part, we don’t get to choose. But even after suffering some involuntary (but largely self-inflicted) discomfort in life, I still have to work to enter someone else’s grief and see their need.

Fighting the numbness of our comfort is a constant battle. Many Christians of the East today choose discomfort simply by choosing faith. At the least they realize that they are at risk of suffering for the sake of the Gospel.

Along with Dostoevsky, Solzhenitsyn was a prophet. America didn’t listen to him in 1978. But we can listen now. If we can shake off our numbness and embrace the discomfort of giving, of purpose, of love.