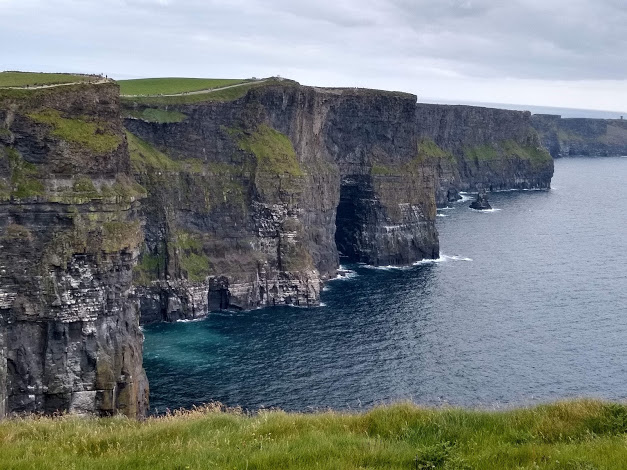 “[G]hosts of dead men . . . have bequeathed a trust to us living men.” Patrick Pearse,

His full name–Patrick Henry Pearse–might lead us to assume that he is the namesake solely of the great American orator who called the Virginia Assembly to liberty or death. America’s Henry survived our rebellion. Pearse did not survive the Rising. He gave his all to it.

Today, Ireland is a beautiful paradise for tourists. Small farms and large ones dot the countryside between a few big cities–growing cities as the young begin to abandon the rural for the urban and urbane–as the country reaches perceived heights of sophistication.

Ireland has come a long way from its pagan days and from its hungry days since the potato famine of 1845 and following. It’s now a land with a solid economy and a growing population. That growth is from immigration.

In 2017, the Republic of Ireland had the highest birthrate in the European Union–yet it was still below replacement levels. And that was before abortion became legal at the beginning of this year–an occurrence that seemed impossible to many even as it unfolded.

In Luck and the Irish: A Brief History of Change, 1970-2000, R. F. Foster includes a chapter entitled “How the Catholics Became Protestants.” That chapter explains the country’s shift from Catholic values to secular ones.

Ireland has taken the same path other western countries have followed from a rejection of sexual license (including nonacceptance of contraception) to the embrace of LGBT sensibilities. From traditional marriage to a no-holds-barred free for all.

Legal abortion was another step on the path to today–although, unlike in America, abortion is limited to the first 12 weeks of pregnancy, barring a risk to the mother’s health and the euphemistic “fetal anomaly”–a death sentence for the challenged at every stage of development. A human sacrifice to convenience, cost-effectiveness–ultimately to self.

Foster: “[T]here is a point at which a la carte Catholicism becomes a kind of Protestantism” (57). It’s the same point at which any Christian decides he or she knows best. Whatever our denomination, it’s when we follow our own way.

Hence, legal abortion in Ireland and the rest of the West. And so we abandon some children to death and others to a different kind of desertion.

In My Father Left Me Ireland: An American Son’s Search for Home, Dougherty explains the shift of heart that’s happened in the West. In the past, we revered and appreciated those who came before us. Our humility in light of sacrifices they made on our behalf “leads to self-sacrifice in the present and new life and regeneration in the future. . . .

“When we do have children we so often have them as consumable objects, as part of our life-style choices. We do not receive them as gifts, as living things, inviolate and inviolable. We calculate about them, not worried over what we might give them, but what they take from us. . . .

“We are great consumers. We are useless as conservators. Useless in this way, we deepen the pattern, failing to have children, or failing the ones we have” (205-07).

Dougherty quoting Pearse: “There is only one way to appease a ghost. You must do the thing that it asks you” (213).