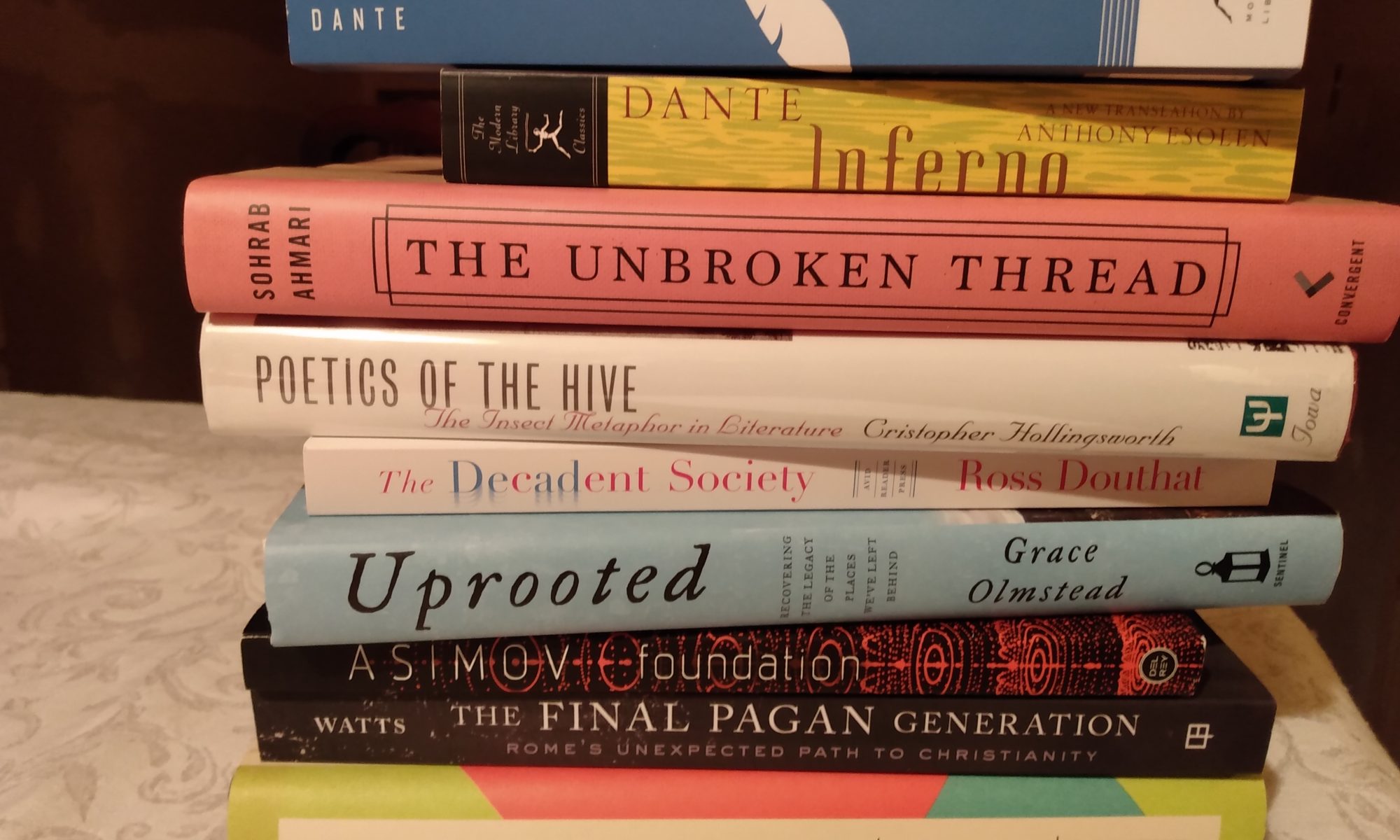 It’s been my New Years’ resolution for the past several rotations around the sun. Every year I build a stack of books in no particular order. Some fall by the wayside displaced by new texts that call my name.

This year’s stack seems a bit more solid. Most I waited to obtain. One was a surprise.

It may help that our television rendered itself useless last summer, and we’ve committed to adding more seating in its place for conversation, including the silent kind that moves from writer to reader.

At the top of the pile sits Dante, an ambitious–perhaps even a bit afflictive commitment. A grandson and I began last summer with his youth version and my noteless translation. In the previous school year, we had read middle school versions of Iliad, Odyssey, and Aeneid in the classroom.

Dante seemed like the next place to go for a youthful foundation in the classics, but I struggled to keep up while googling the confusing parts. So much for a noteless rendering. As the weeks of summer passed, we remained in the infernal regions. I want to climb higher this summer.

For Christmas, his mother found me versions of Inferno and Purgatorio with notes by Anthony Esolen. (His annotated but difficult-to-find Paradisio arrived yesterday. Apparently, it’s an elusive text on the more well-traveled sites of book vendors showing that everybody really does want to go to heaven.

I plan to walk further into Dante’s vision with this grandson when the school year ends. Perhaps we can find Paradise before the start of another academic year.

In the meantime, I rang in the New Year finishing A Canticle for Leibowitz. Sci-fi, post-apocalyptic–even post-post (far after) the flame deluge otherwise known as nuclear war. Dry in spots, hilarious in others, vastly profound overall, Canticle is worth your time. I punctuated my reading of Walter M. Miller Jr.’s final few pages of the text with frequent exclamations of “Wow!”

Toward the bottom of the pile sits my first foray into the works of Isaac Asimov. I’m not quite halfway through Foundation, the first in a series. Both Asimov and Miller emphasize the importance of recording and remembering history.

The men’s divergent worldviews are apparent. Miller’s text presents a secular world in which a Christian remnant champions the effort to rescue literacy and preserve the past in the hopes of preventing humanity’s self-destruction. Miller invites us to remember what the world is, and is not.

Asimov’s text makes no allusion (so far) to faith. His depiction of the political is apt, some may say accurate, others, cynical. Asimov is the easier read. Miller is worth the work.

The rest of the stack is non-fiction. Ross Douthat presents our society, The Decadent Society: America Before and After the Pandemic. He offers us two possibilities for COVID’s ultimate outcome: catastrophe or renaissance. We are truly at a crossroads.

Carl R. Trueman offers The Rise and Triumph of the Modern Self: Cultural Amnesia, Expressive Individualism, and the Road to the Sexual Revolution. It’s another study of how we got where we are.

The Final Pagan Generation: Rome’s Unexpected Path to Christianity by Edward J. Watts provides insight into what the world was like as the power structure of an empire was turning upside down, from pagan to officially Christian. That seems pertinent in our world as a form of paganism, at least in the West, displaces Christianity.

Uprooted: Recovering the Legacy of the Places We’ve Left Behind by Grace Olmstead discusses the ramifications of the uprooting many (most?) Americans have experienced today.

I remember the local communities of my youth, neighborhoods within our city. The second and third generations removed from immigrants felt a connection to the motherland and to our locale. The grandparents and great-grandparents came here but kept close ties through the fellowships of the Sons of Italy social hall or the Unter Uns (German) Society.

Some of those ties still bind smaller communities together. Many have scattered. Olmstead calls them home, truly and virtually.

In a similar vein, Sohrab Ahmari’s work The Unbroken Thread: Discovering the Wisdom of Tradition in an Age of Chaos proposes a way to find happiness, not in a self-crafted identity, but in pursuing virtue and accepting limits. Ahmari emigrated to the US from Iran and, among other job titles he holds, is a contributing editor for the Catholic Herald. He calls himself a “radically assimilated immigrant” and invites us to examine our lives to “live more humanely in a world that has lost its way.”

Ahmari’s book is the surprise in the pile, a gift from a son who often finds gems I’ve not stumbled over yet.

Finally, Christopher Hollingsworth has crafted The Poetics of the Hive: The Insect Metaphor in Literature. I don’t like bugs, but I anticipate the delight of following a thread of metaphor through literature.

As I write, I realize that, including the bugs, these books are about the importance of remembering history, understanding our own culture, and urging society toward renaissance instead of catastrophe.

Reading can be easy or hard depending on the text. The remembering, understanding, and urging are hard work. But important work, work with eternal purpose.

Therefore, my beloved brothers, be steadfast, immovable, always abounding in the work of the Lord, knowing that in the Lord your labor is not in vain (I Corinthians 15:58 ESV).