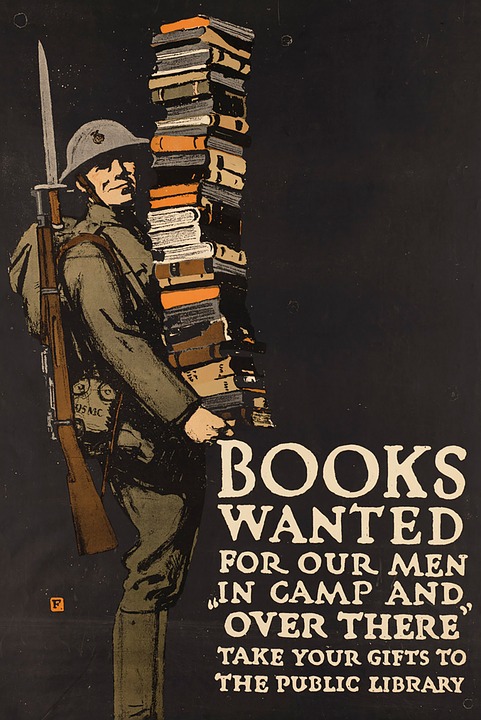 Every good gift and every perfect gift is from above, coming down from the Father of lights, with whom there is no variation or shadow due to change. (I Timothy 1:17, ESV)

It was a work of Providence I might have missed. I have no idea how long the book sat on the shelf waiting for me to buy it. But I do know it was there just for me, for us, just for the moment we would need it.

That moment would be one every mother who has watched her son go to war knows. It’s an indescribable emptiness. But an almighty God can reach down to fill a heart’s void. And He can use any little nook or cranny to do so.

My daughter and I were in an antique store passing time as we waited to see my son off. He was deploying to Iraq.

While we shopped, his unit was on base packing equipment. Families would see our soldiers later that evening for a short time before they left for their departure point.

A yearlong deployment lay ahead.

But there on the shelf sat his favorite book. It cost only a couple of dollars. The Good Earth, by Pearl S. Buck. How good it would be to give him a book he loved.

But there was more.

As we were helping him pack later and preparing to say farewell, my daughter picked the book up and read the back cover flap.

“This book can be sent to a serviceman anywhere in the world for the price of a postage stamp.”

The book was copyrighted in 1942. Published for soldiers during World War II–when my father served–it landed in the hands of my soldier son decades later.

I wondered where it had traveled and who had already read it.

Buck’s masterpiece is about a man who battles hunger and injustice. Not quite war–rather wars of a different sort. He had moments of glory, times he didn’t do the right thing.

Even before my son read it, it was a book I had come to love. I’d read it because it was my husband’s favorite book. Paper ideas about important things in life. Paper becomes glue connecting those who’ve read a book and discussed its meaning.

When my son left for war, he carried a piece of home and history with him.

I still had moments of emptiness, moments of worry during that year. But a great God had put a book on a shelf for us to find that day–to remind us that He sees. He cares. He loves.

This time of year is when we celebrate His coming.