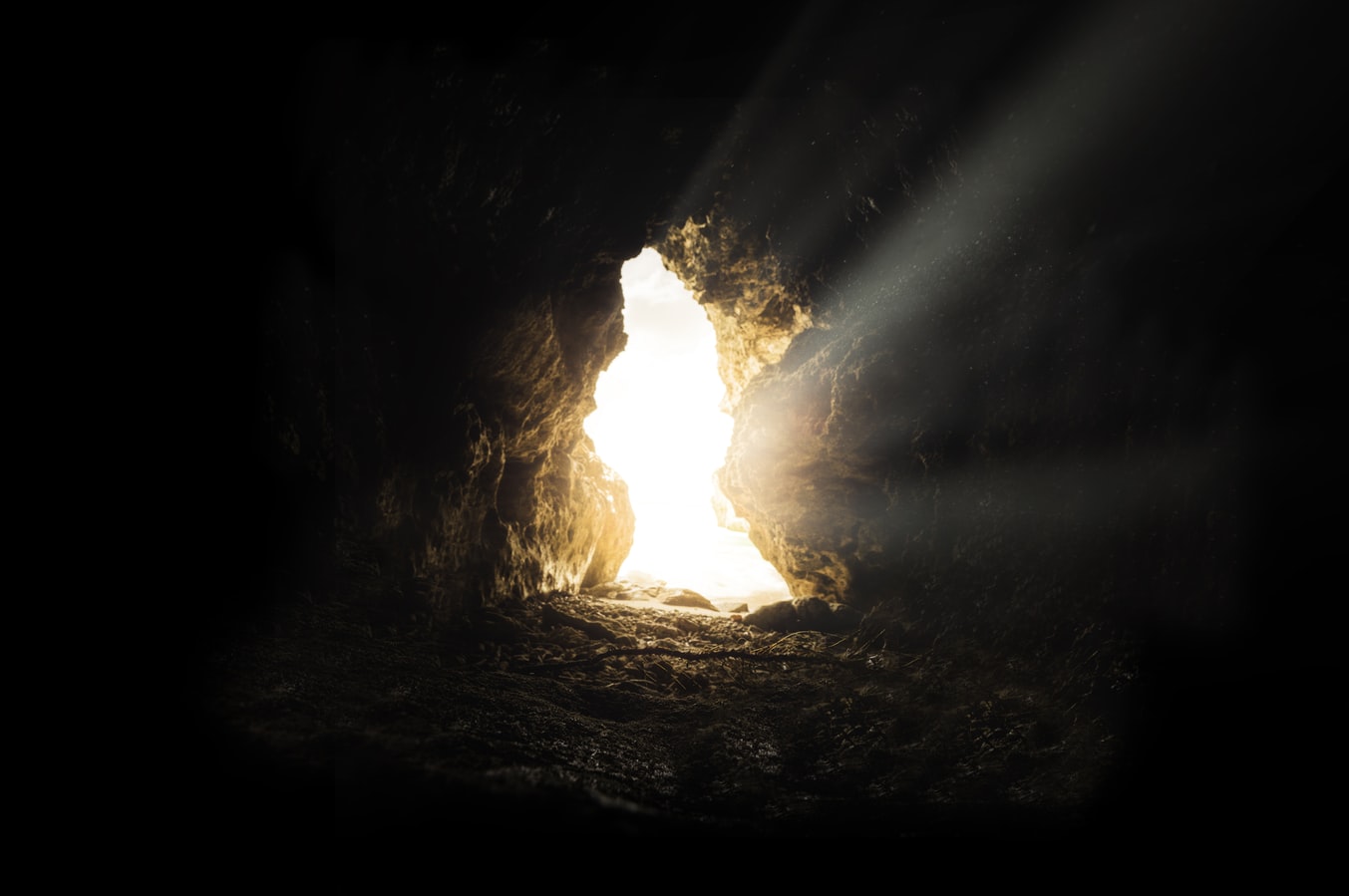 The man’s eyes adjust to the sunlight. He finds his way. And he decides to reenter the cave and tell the others still in bondage there what he has discovered: They are only looking at shadows.

But they are content. They call him a lunatic. They know what is real. It’s right in front of them. Plain as day.

They stew in the darkness of the cave.

British writer G.K. Chesterton pointed out that one man who was born in a cave grew up to an unjust death. Then He emerged from his cave tomb. At no point did his eyes need to acclimate to the light. He had created it. He spoke it real and it became reality.

I wrote a poem to record to music, but I wanted another voice along with my own on the piece. So I went to my kids’ elementary school and interviewed six first graders. I asked them, “What is Christmas?”

But my results actually came close to how Americans view Christmas today. Pew has issued a study showing that only 55 percent of Americans celebrate Christmas as a religious holiday.

Many of us bemoan such news. But our complaining about the de-sacralization of the holiday hasn’t changed the minds of those enjoying a holiday they deem secular. All our griping has not turned a tide toward keeping the day holy.

The Pew study investigates belief (or disbelief) in the details of the Christmas story: Jesus’ virgin birth, the shepherds, and angels.

Belief in those details, of course, reflects faith in who Christ is. Those details hold great meaning. Christ is sinless because he had no human father. God as his Father means he is perfect God as well.

When Christ was born, God the Father sent angels to the socially lowest of people–the disregarded, the outcasts–the shepherds. The presence of shepherds within walking distance of Bethlehem indicates that Christ was not born in December. Shepherds typically did not keep their flocks near villages because of the odor they caused. They would be nowhere near Bethlehem except during a 30 period before Passover–a period of preparation for the yearly sacrifice.

The shepherds outside Bethlehem were Levitical shepherds. Ironically, they were ritualistically unclean. They walked through feces. They touched dead things.

Christ was the sinless Son of God, the perfect Lamb to be sacrificed for the shepherds’ sins–for our sins. Those are details many today disregard.

If we find the cultural embrace of a secular Christmas disturbing, we can still keep the true Christmas in our hearts. We can heed the angels’ message of “Fear not.”

“Don’t take this sobering news [of the Pew study] as a reason to rend your garments and wail. Use it as reason to make your family’s celebration of Advent and Christmas more religious.” Rod Dreher.

As we do, we remember that, on that first Christmas, God invited the unclean to see His Son.

Those who reject him today—or ignore him—are yet among the invited. The invited who refuse to come out of the cave.

The baby’s birth in one cave, and the man’s emergence from another, marks a division in the history of humanity. G.K. Chesterton writes,

“There is even a shadow of such a fancy in the fact that animals were again present [for Christ’s birth]; for it was a cave used as a stable. . . . It was here that a homeless couple had crept underground with the cattle when the doors . . . had been shut in their faces; and it was here beneath the very feet of the passers-by, in a cellar under the very floor of the world, that Jesus Christ was born. . . . God also was a Cave-Man, and had also traced strange shapes of creatures, curiously coloured, upon the wall of the world; but the pictures that he made had come to life.”

Christ brings peace on earth–within our hearts. He is the perfect sacrifice for us. When we celebrate him, our silence can overwhelm the noise and darkness.

Embrace His peace. Celebrate him. Shine the true light. Keep faith in dark days and steep in his peace. Speak the glory of God to each person you meet. Celebrate his birthday throughout the year in awe of our great God.