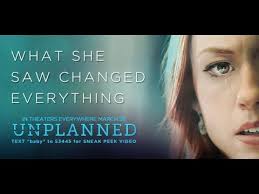 Unplanned is the story of Abby Johnson’s journey from college student to Planned Parenthood volunteer to clinic director to pro-life advocate. It’s in theaters now–but it won’t be there after this weekend unless it makes big box office numbers.

The film begins with Johnson’s statement that the story will not be easy to watch. The film garnered an R rating–ironically making it more difficult for a 15-year-old to see the movie than it would be for her to schedule an actual abortion.

There is no nudity, very little foul language–no F bombs, no God’s name in vain.

Even so, the first ten minutes of the movie may haunt me for a very long time. That portion of the movie depicts a sonogram-guided second-trimester abortion.

There are a few other emotionally jarring scenes. Johnson’s endurance of a chemical abortion (not the simple procedure abortion ors present) and the staff dealing with a patient’s perforated uterus (without calling an ambulance) among them.

Ashley Bratcher as Johnson provides an excellent portrayal and delivers a broad range of emotions from the joy of Johnson’s second marriage to anguish over the final realization of what her work for eight years as an “abortion provider” had truly entailed.

But the uncredited star of her story is the prayer others offered on her behalf and for the cause of ending abortion.

Yet there is more power in the prayer that asks God to end the horror and grant forgiveness, mercy, and grace after years of pursuing and encouraging death.

This movie can change you.

In more ways than one.