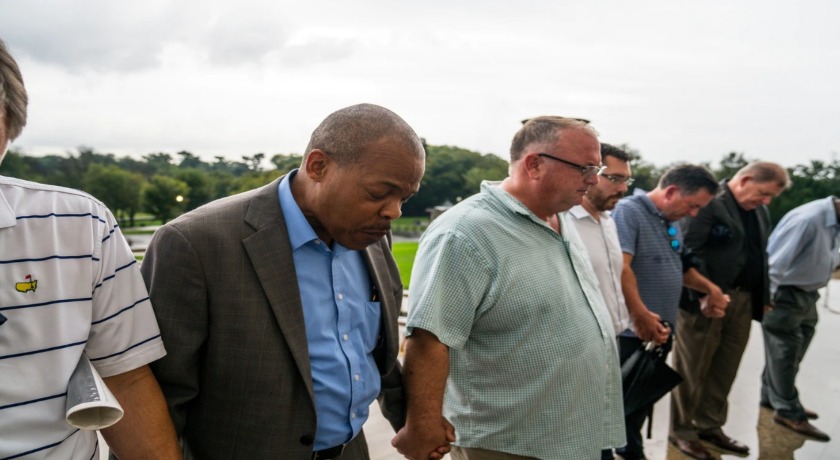 Patti Thor is my guest writer today. Patti’s message calls Christians to pray in unity. That’s a hard thing to ask sometimes–unless the times are like those of World War II–or those of today ~

Unify or die. That was the choice facing Winston Churchill, the unwanted, newly appointed Prime Minister of Great Britain, in May 1940. Political factions, an ailing economy and a failing military front in Europe were career-ending challenges for the ousted Prime Minister Neville Chamberlain. Churchill inherited these problems plus had to navigate Britain’s imminent defeat or surrender at the hands of a cruel and oppressive Nazi Germany. Knowing that over 300,000 British troops were being overrun by the Nazis with no other option than certain death and that the fate of Great Britain and the free world were at stake, Churchill informed the king.On May 24, King George VI addressed the nation: “Let us with one heart and soul, humbly but confidently, commit our cause to God and ask his aid, that we may valiantly defend the right as it is given to us to see it.”

This National Day of Prayer (the first of seven) was to be held two days later, on Sunday May 26th. Millions responded. The Daily Sketch claimed, ‘Nothing like it has ever happened before.’

Much happened during the years to follow. Victory was not easy, but the resolve of the nation shifted from being defeated to defeating this foe of tyranny. Stories of Divine Intervention circulated, such as the many miracles at the Battle of Dunkirk (May 26 to June 4, 1940). Each story of miraculous intervention served to boost the faith of the prayer warriors in the homeland.

Major Wellesley Tudor Pole realized that if people were asked to devote one minute to a Prayer for Freedom and if enough people joined in this gesture of dedicated intent, the tide would turn and the invasion of England would be diverted. Tudor Pole took his request to the king and Churchill and won the support of both. During The Blitz on the UK (fall 1940), the prayer initiative was started.

In 1945, a British intelligence officer was interrogating a high Nazi official. The British officer asked the Nazi official why he thought Germany lost the war. His reply was, “During the war, you had a secret weapon for which we could find no countermeasure, which we did not understand, but it was very powerful. It was associated with the striking of the Big Ben each evening. I believe you called it the ‘Silent Minute.’

Nearly five grueling years of battle, six National Days of Prayer and many more miracles later, the terrorists of Nazi Germany were defeated, and the country and world were safe from the hands of Hitler’s regime and ideology.

At 9:00 p.m. on May 8, 1945, the chimes of Big Ben rang out and King George VI made a radio broadcast to his people. Some highlights of his speech:

Today we give thanks to Almighty God for a great deliverance. Speaking from our Empire’s oldest capital city, war-battered but never for one moment daunted or dismayed – speaking from London, I ask you to join with me in that act of thanksgiving. Germany, the enemy who drove all Europe into war, has been finally overcome.

There is great comfort in the thought that the years of darkness and danger in which the children of our country have grown up are over and, please God, forever. We shall have failed, and the blood of our dearest will have flowed in vain, if the victory which they died to win does not lead to a lasting peace, founded on justice and established in good will. To that, then, let us turn our thoughts on this day of just triumph and proud sorrow; and then take up our work again, resolved as a people to do nothing unworthy of those who died for us and to make the world such a world as they would have desired, for their children and for ours. This is the task to which now honour binds us. In the hour of danger, we humbly committed our cause into the Hand of God, and He has been our Strength and Shield. Let us thank Him for His mercies, and in this hour of Victory commit ourselves and our new task to the guidance of that same strong Hand.

Today’s enemy is not so straightforward, but the effects are similar. Terror and destruction are on the rise. Murder, rape, and violence are escalating in our cities, in and around otherwise peaceful protests. Parts of our cities are being hijacked and the locals are subjected to the rule of unknown dictators. Stories of systemic oppression are emerging. Each side claims to be acting in the name of all that is good, and that they are fighting for the America of the future.

Jesus told us that a house divided against itself will not stand. To this sentiment, Abraham Lincoln added: “I do not expect the Union to be dissolved — I do not expect the house to fall — but I do expect it will cease to be divided. It will become all one thing or all the other.” [House Divided speech]

At this moment, the Body of Christ is more divided than ever, and this nation is more fractured than during Lincoln’s time. We fight and judge each other for having differing views on issues such as immigration, school choice, schools re-opening, taxes and tax breaks, centralized vs decentralized government, and multitudes more. I ask, is Christ schizophrenic? Does he want his kids fighting? Jesus instructs his disciples to, “Love one another. As I have loved you, so also you must love one another. By this everyone will know that you are my disciples if you love one another.” John 13:35 (NIV)

Love is patient, love is kind. It does not envy, it does not boast, it is not proud. It does not dishonor others, it is not self-seeking, it is not easily angered, it keeps no record of wrongs. Love does not delight in evil but rejoices with the truth. It always protects, always trusts, always hopes, always perseveres. 1 Corinthians 13:4-7 (NIV)

What if we could come into complete agreement in prayer? What if we acknowledge God’s Will as higher priority than each of ours? What if we each lay our personal agendas down and yield to God’s?

What could happen if each of us would use The Silent Minute to come into unity. Unity is imperative to defeating this pervasive foe, who is using guerilla warfare tactics. We can’t even agree on who the enemy is.

[The] enemy is crafty and cunning and full of novel treacheries and stratagems … and there is no dirty trick he will not do. [Their Finest Hour speech]

Can we agree that the enemy in our war is not a person?

Bishop Albert Jamison described to Fox News that the July 15th NYC Jericho March was about praying for unity. He said, “In my opinion, the Republicans are not the problem and the Democrats are not the answer.” He reminded the viewers of 2 Chronicles 7:14:

If my people, who are called by my name, will humble themselves and pray and seek my face and turn from their wicked ways, then I will hear from heaven, and I will forgive their sin and will heal their land. (NIV)

Are there long-lasting effects of this WW II prayer of unity? In August 1944, American cargo ship SS Richard Montgomery sank east of London near the mouth of the Thames Estuary. It went down with over 1,500 tons of munitions. Some argue that a resulting explosion could potentially send a tidal wave up the Thames and devastate London. Could the fact that these explosives have never detonated to this day, be a direct result of a nation’s unified prayers for God’s protection?

Remember that the weapons of our warfare are not carnal, but mighty through God to the pulling down of strong holds. 2 Corinthians 10:4 (KJV)

I propose that we all use a prayer like this during The Silent Minute:

During these upcoming elections, we ask that You remove and/or expose all cases of voter fraud and silence all false arguments of the same. We cover all illegal ballots in prayer to the end that they would not be counted.

We ask You to move on the hearts of Your people to vote for those candidates who will choose to do Your will and who will govern in righteousness and love. We ask that any candidate who will not do Your will would not be elected.

We pray for the health of the people in our nation and our world. We ask that You sovereignly destroy the COVID-19 disease around the world and that the SARS-CoV-2 (novel coronavirus) would never again bring harm.

We ask that You bless our humility and repentance with Your Grace and Mercy.

We ask that You give us Your heart for the poor, disadvantaged, disabled, persecuted, forgotten and oppressed members of our society. We repent for having neglected our duties in this area and for relying on the government to be their keeper. We ask You to give us Your eyes to see how we can help them.

We ask that You restore our economy in such a way that we, your people, would use these finances to share the gospel and help the needy in our nation and beyond. We ask that You convict us to release into Your Kingdom our excess stores which are not currently being used for Your purposes. (Luke 12:16-21)

We ask that America would again be one nation under God. AMEN

Patti Thor is a Speaker, Best-Selling Author, Entrepreneur, Mother and Giver. Patti volunteers in a District Leadership role for Toastmasters International, an organization that grows the confidence of adult learners by teaching/practicing communication and leadership skills.

Thor is the author of Secrets to Raising Amazing Kids Without Being a Perfect Parent: Seven Simple Steps to Strengthen Your Child’s Self-Esteem, Significance and Confidence – Most parents wonder the same things. Can I do this? Will I be a good parent? Am I going to ruin my child?

I’ve learned that great parenting is not about being a perfect parent. It is about being real, being passionate and being creative in the midst of being flawed.

These simple steps will empower your parenting skills to give you confidence in interacting with your child and to give you the skills to recover from mistakes you will make as a parent. Not to worry, your kids will still be amazing.

Nothing But Net, a Best Seller – Top speakers share their best business tips.

Quotes from Patti Thor have been used around the world to help increase volunteerism and donations. They appear in numerous books and articles including:

Permissions: You are permitted and encouraged to reproduce and distribute this material in any format provided that you do not alter the wording in any way, do not charge a fee beyond the cost of reproduction, and you credit the author–today, Patti Thor.

Disclosure of Material Connection:  Nancy E. Head has not received any compensation for publishing this post. She has no material connection to the entities mentioned. Restoring the Shattered is published through Morgan James Publishing with whom Nancy E. Head does share a material connection. She is disclosing this in accordance with the Federal Trade Commission’s 16 CFR, Part 255: “Guides Concerning the Use of Endorsements and Testimonials in Advertising.”